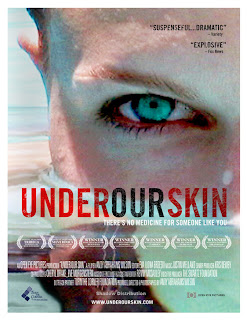 Can you imagine? Being so sick that you can't walk nor even control your actions. You go to see your doctor, then 5 more, then a dozen more and all of them say the same thing. "You're faking it. Go see a shrink. You have already been cured." The frustration and fear of Lyme's disease patients are palpable throughout this fine documentary. Lyme's Disease is named for a small town in Connecticut where the diligent work of a resident, who noticed all the illness in her neighborhood, forced doctors and researchers to investigate. We now know that ticks, primarily deer ticks, transmit this disease through biting humans. What I did not know is how devastating it can be if left untreated/undiagnosed.

Director Andy Abrahams Wilson does a terrific job of conveying these extremely difficult situations with this film. There is lots of footage of patients from around the country telling their very personal stories. They describe the horrors of the disease, the difficulty in getting diagnosed and treated and how they have to travel thousands of miles to find any doctor who is willing to help. Wilson also attempts to expose some of the hypocrisy of doctors and insurance companies as they fight to protect their own patents and income.

This movie is well-filmed, interestingly edited and compelling to the viewer. It also quite maddening! When you see doctors with God Complexes telling people who can't walk that "it's all in your head" or "you are a pretty girl. Can't you get attention some other way?" you may wish to strike something. But that shows the power of Wilson's work with Under Our Skin.

Take a long look at this film, just don't keep anything breakable nearby. It may not survive.

Filmed in 2008, directed by Andy Abrahams Wilson.
Posted by CinemaSteve at 10:29 AM