The Americanization of Emily

It is James Garner day on TCM. Enjoy this great film tonight! 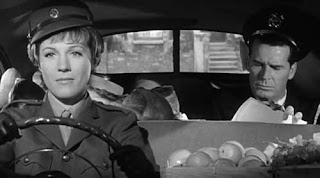 One of my 20 favorite films of all-time. James Garner plays a self-proclaimed "coward" who takes excellent care of a U.S. Admiral in 1944 London. Julie Andrews plays his driver who has been widowed by the war. Their cynical romance is the centerpiece of the story. Garner then becomes the focus of his Admiral's plan to make a movie about the "unknown sailor". The first person to die during the D-Day invasion is to be a sailor and Garner, the coward, is to film the event. Needless to say he is unhappy about this turn of events.

Paddy Chayefsky writes a biting script. While a few moments sound just a little preachy, his anti-war message comes through with passion. The comedy portions of this dramatic comedy are dark and filled with sarcasm. Just how I like it! The dramatic portions are a loud statement on the devastation of war.

Disclaimer: I must admit to a "man-crush" on James Garner. From TV's Maverick, to The Great Escape and on to Murphy's Romance I find him to be one of the most compelling actors. Julie Andrews does a top-notch job as the priggish motor pool driver. Their love story is intriguing while their role change ending is must-see. James Coburn does a superb job in a supporting role as a naval icer as does Melvyn Douglas as the Admiral. The cast, script and direction all make The Americanization of Emily a great movie!

Director Arthur Hiller shows a light hand in dealing with Chayefsky's script. It takes a lot of courage to allow the story to unfold and Hiller shows that courage. The producers of this film originally hired William Wyler, but he refused to honor the script. Hiller replaced the directorial legend and did a fantastic job. A wonderful film that is on almost every greatest films lists that you can find. Add this to the top of your netflix queue or buy it today!

Filmed in 1964, Directed by Arthur Hiller, Written by Paddy Chayefsky, Starring James Garner, Julie Andrews, James Coburn, Melvyn Douglas and Keenan Wynn. One bit of trivia:The beach scenes were filmed at Mandalay Beach in Oxnard, CA. If you watch closely you can see the power plant in the background. It still operates today.
Posted by CinemaSteve at 8:17 AM