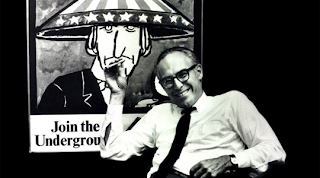 The free flow of books, ideas and information today is due, in no small part, to the efforts of Barney Rossett.  Mr. Rossett was the publisher/owner of Grove Press and The Evergreen Review.  During the 1950s Grove Press fought long-running legal battles to publish, in America, books like Henry Miller's 'Tropic of Cancer' and, later, the works of William S. Burroughs like 'Naked Lunch'. Grove and Evergreen also introduced writers like Samuel Beckett (they published 'Waiting for Godot'), Pablo Neruda, Octavio Paz, Kenzaburo Oe and, my personal favorite, Eugene Ionesco.  For his efforts, Rossett fought decades of lawsuits and arrests for publishing these materials.  Later, Grove introduced some films like 'I am Curious:Yellow' and added a fight for cinematic freedom as well.

Miller's works were already sold in Europe, but were banned in the United States.  They were considered "obscene".  Rossett was introduced to these works on trips to Europe.  He decided that they should be available in America.  In a day and age when you can get almost anything on Amazon.com it is important to remember that only 50 years ago owning or selling these books would get you arrested. 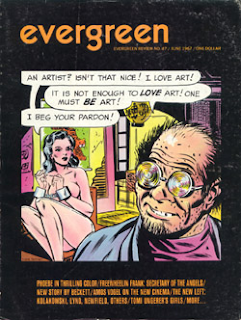 As Grove would publish these books they had to fight legal battles as they were confiscated in many different states or cities.  He practically bankrupted himself in the legal battle for freedom of the press.  We give awards and medals to heroic individuals and I believe Mr. Rossett deserves one as well.

Obscene is a simple documentary that tells the story of Rossett's life-long commitment to freedom.  There are interviews with many authors and compatriots.  There is also a look at the efforts of the FBI to close him down.  Directors Daniel O'Connor and Neil Ortonberg let the players tell the story in their own words.  I found many nuggets of interesting, off-beat and compelling details in this fascinating story. 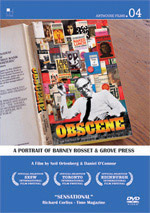 Posted by CinemaSteve at 4:00 AM