Glenn Ford is an under-rated actor. His work includes some great films like the original 3:10 to Yuma, The Courtship of Eddie's Father

and Blackboard Jungle I think he would receive more recognition. One of his best is the original Ransom. Remade by director Ron Howard with Mel Gibson, this original version is a drama that focuses upon tension instead of action to hold the viewers attention. And hold our attention it does. With only a small cast featuring Donna Reed and Leslie Nielson, as a dramatic not comedic actor, the story centers on the kidnapping of Ford and Reed's son. The film uses intense dialogue and strong acting to build the tension throughout. I will not reveal the intense ending. 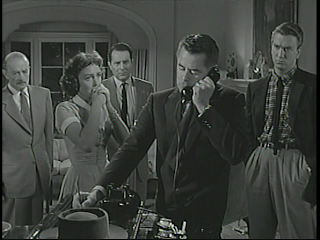 What makes 1956s Ransom different, and better, than most kidnapping dramas is the plot twist. Instead of paying the kidnappers for the return of his son, Ford puts out a bounty upon them. He does this without informing anyone in advance. Not the police, the media, not even his wife. Most of all she is unhappy with his brash plan. The story continues with Ford racked with guilt and second guesses about his decision. His wife, portrayed by Donna Reed, is tormented with concern. Nielson does a fine job as a reporter trying to cover the story and help this poor, pressured couple.


A top-notch cast with an intense script allows director Alex Segal to use a very light hand. Minimal direction, sets and music forces the drama to take center stage. Segal made his career doing television and this theatrical release has a feel of tv. Still cameras that follow the action instead of trying to make the action. Personally I prefer this style. Ransom

is a simple film with terrific action and intense drama. Enjoy!