To honor the memory of Anne Francis, I decided to re-post this article about the sci-fi classic! Rest in Peace Ms. Francis. 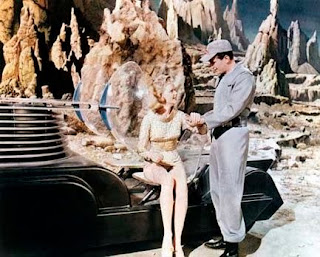 This film is just plain fun! It has everything one could ask for in a 50s science fiction film. The greatest robot ever, a cool monster, psycho-babble (for relevance), lasers, flying saucers, a hot blonde and Shakespeare in space. The only thing missing is more. More robots, more lasers, more blondes!

Seriously, Forbidden Planet is a major sci-fi film. The first successful science fiction film that did not feature a previously known lead (like Flash Gordon or Buck Rogers). The audience had to be convinced to come to the theatre based upon their desire to experience a new kind of movie. Science fiction with intelligence and story not just monsters that eat people and destroy cities. I mention Shakespeare because this movie is 'The Tempest'. Take the story of 'The Tempest', move it to outer space and add some references to modern psychology (like "the superego"). Read the play and then watch this movie. Most of the major developments are lifted from the Bard. 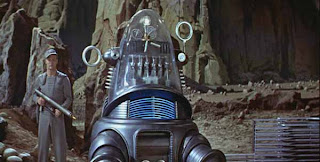 Forbidden Planet is also important for 'Robby the Robot'. Far and away the most famous movie robot until the droids of 'Star Wars'. The robot became one of the biggest draws of people at theaters and businesses after the release of this film. Kids loved him! Women wanted him! Men wanted to be him! Okay, that may be a little strong, but Robby was popular (and still is). After the debut of Forbidden Planet, the robot would draw a large and vocal crowd any time he/it was scheduled to appear. A duplicate was later featured on the t.v. show 'Lost in Space', in part to draw in his fans. Robby is listed in the credits as "Robby the Robot as himself".

The movie deserves kudos for being intelligent. It is not just a western in space. Difficult subjects like runaway egos, interpersonal relationships and humanity's impact upon its own future are tackled. One of my favorite things about science fiction is its ability to handle strong ideas and questions and still be entertaining and popular. Films about the ego could turn viewers away, but make it the runaway ego of a space explorer playing God and the audience eats it up. 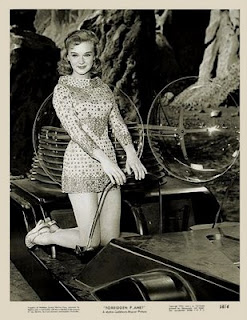 The plot is simple. A governmental ship makes a routine inspection visit at "Altair IV". Leslie Nielsen, back in the days when he made serious movies, is the space ship's Captain. They are checking on the status of a group of scientists that landed there years ago. They find that only one scientist remains. Walter Pidgeon plays Dr. Mobius. His daughter, played by the lovely and short-skirted Anne Francis, is the only other person alive. They have built Robby the Robot to help with their lives. Mobius warns the ship to leave immediately. He can't be held responsible for the safety of the ship nor its crew. Why is he so afraid? How did they, and no one else, survive? Each of the crew want to know how to get a date with Anne Francis. When the ship refuses to leave a monster attacks. An invisible, unstoppable monster. Who, if any one, will survive and how will they attempt it?

One other important note:the soundtrack and score for this movie are revolutionary. The composers Louis Barron and Bebe Barron changed movie music forever. This is the first film to feature a score that is entirely electronic. It is so different and unique that the musician's union refused them credit as "composers". Instead the score is called "electronic tonalities". This electronic score would blaze the trail for science fiction films to come.

An intelligent script (thanks Shakespeare), a story filled with surprises, an invisible monster and the best robot ever make Forbidden Planet science fiction fun for one and all! 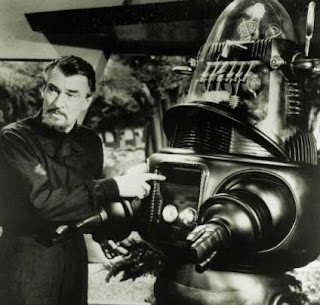