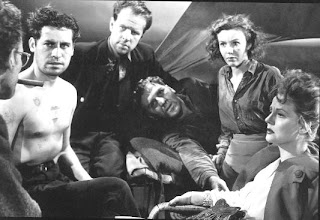 Although I am not a huge Alfred Hitchcock fan, this is my favorite of all his films. Simple in setting and story, but rich in character! Lifeboat focuses on a small group of survivors of a German U-Boat attack upon their merchant ship during a World War II Atlantic crossing. This group of survivors find themselves thrown together in their lifeboat. Unsure of what to do, which way to head, even of their very survival. How do people of all walks of life, different nationalities, income levels, genders and races react under immense pressure? Can they overcome the elements, and their own prejudices, to find their way home?

Based upon a play by John Steinbeck, Lifeboat is Hitchcock at his best. The restriction of only one set (the lifeboat) and no new characters could be daunting for a film maker. But Hitchcock uses his penchant for experimenting to his advantage. I never felt as if the movie suffered due to the lack of new elements. No new characters means we get to know these people in great depth. No new sets means that we focus upon story not on cinematography or costumes. The original Steinbeck work was written for the stage. Screenwriter Jo Swerling takes advantage of the fantastic dialogue to give us a depth of connection with the characters that few movies ever achieve. I found myself agreeing or disagreeing with the statements being made and with the choices made on a very personal level. 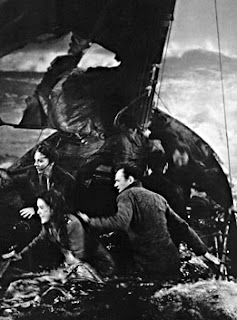 Hitchcock also takes advantage of a deep cast. Tallulah Bankhead stars as Connie Porter, a wealthy socialite/writer who travels the world covering the war. She is the first person to be in the lifeboat. Quickly the other survivors join her as their ship is sinking. Hume Cronyn, Mary Anderson, Henry Hull and Canada Lee all do fine jobs in supporting roles. But it is the conflict between Walter Slezak, as the German U-Boat Captain, and John Hodiak, as the sailor who takes command of the lifeboat, that moves this movie forward. Slezak does a perfect job portraying the German officer. He is both conniving and helpful in the most authentic of performances. Hodiak also shines with his leftist ranting and demands for action to keep us focused on this most difficult of situations. All together a terrific cast.

Take the greatest American writer of the 20th Century and add an international icon of a film director. Dump in a deep and strong cast and you end up with a fantastic film about human emotion under pressure. Would you crack?

Filmed in 1944, directed by Alfred Hitchcock, written by Jo Swerling from a play by John Steinbeck, starring Tallulah Bankhead, Walter Bendix, John Hodiak, Walter Slezak and Hume Cronyn. For an in-depth look at another fantastic film penned by Steinbeck, read my post about 'The Grapes of Wrath'.

One question. After this film's release in 1944 some critics labeled this film as "pro-Nazi". I don't find that at all, but I wonder what is your opinion?
Posted by CinemaSteve at 7:34 PM