This fabulous film is on TCM tonight. Enjoy it again or for the first-time! 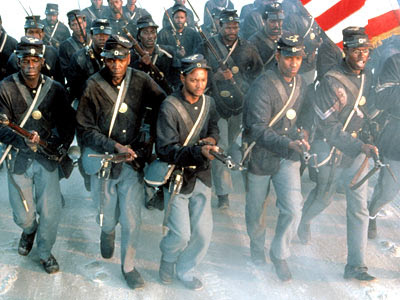 Robert Shaw was a Massachusetts born abolitionist during the Civil War. He volunteered to be the commanding officer a the first all-black unit of volunteers that would fight for the United States against the Confederacy. This unit, the 54th Mass. Regiment, would fight in major moments through-out the Civil War. Glory tells their amazing and moving story.

Director Edward Zwick combines two traditional movie genres in this film. We have an epic war film with battles that seem life-like. And we have a wonderful character film that shows us so much about the individuals that made up the 54th Massachusetts. The movie's cast helps to make the film so powerful. Matthew Broderick, as Col. Shaw, does a first-rate job. This is one of the few times that Broderick branches out into serious drama. He should consider it more often. He provides us with insight into the difficulties of a white officer leading a group of black soldiers during the Civil War. He faced prejudice from his Southern adversaries and fellow officers and enlisted men from the North. Shaw's personal letters make up a large source material for this movie. It definitely shows. 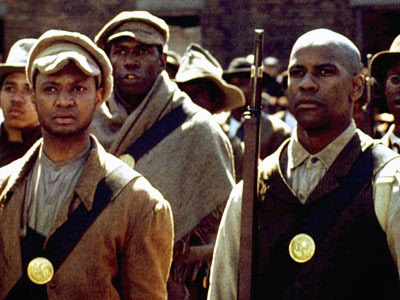 Also in this amazing cast are some leading black actors. Morgan Freeman, as the sergeant who leads the men through training and battle, gives his usual strong performance. A very young Andre Braugher is terrific as is Jihmi Kennedy. But Denzel Washington stands out among the fabulous portrayals. He would win the Oscar for Best Supporting Actor. His work in Glory is some of the finest acting you will ever see. The range of emotions experienced by his character, Private Trip, is vast. Denzel definitely deserved the award. As I talk to people no one can think about his character without mentioning the effect that Pvt. Trip and Glory made upon them.

This is a deeply moving film, filled with emotion, and it is a well-crafted war movie. See it for both of those reasons. 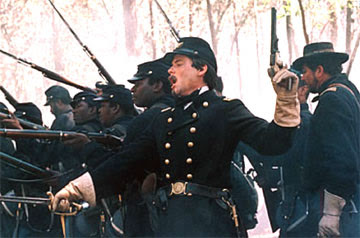 Filmed in 1989, directed by Edward Zwick, written by Kevin Jarre from the books 'One Gallant Rush' by Peter Burchard and 'Lay This Laurel' by Lincoln Kirstien and Richard Benson as well as the letters of Robert Gould Shaw, starring Matthew Broderick, Denzel Washington, Morgan Freeman, Cary Elwes, Jihmi Kennedy and Andre Braugher.

One personal note: There was some questioning of casting Denzel Washington. At the time he was best known for his work on television in a show called 'St. Elsewhere'. I loved that show and was glad that some of the cast was getting major attention. 'St. Elsewhere' also featured future headliners Howie Mandel, Ed Begley, Jr., David Morse, Mark Harmon and Alfre Woodard. I am not sure why, but most of the show is unavailable on DVD. Also, Washington had also done a wonderful movie entitled 'Cry Freedom'.
Posted by CinemaSteve at 9:12 AM