Seven Days in May

This great thriller is on TCM on tonight at 11:30 PM Eastern. Don't miss it! Or, you can download it via the link on the left. 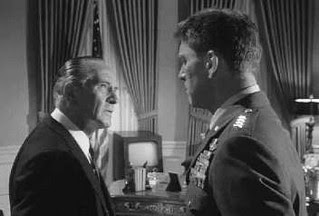 This is a political thriller starring Burt Lancaster and Kirk Douglas. Lancaster portrays an Air Force General who is organizing a military coup against the U.S. Government. Douglas portrays his aide who discovers the plot. Can he stop the plot before the takeover by the military? Who can he trust?

Seven Days in May was directed by John Frankenheimer. Frankenheimer is best known for his disturbing masterpiece 'The Manchurian Candidate'. Seven Days in May is taut and compelling. The story builds to a very satisfying finish. The script was written by Rod Serling, based upon the excellent book by Fletcher Knebel and Charles Bailey. I remember, as a teen, reading this book and not wanting to put it down. I wondered if it was possible, in our great democracy, for the military to take over? That question has been repeated, in novels and the media, for the almost 40 years since this film debuted. The Serling script treats the viewer as intelligent and worthy of respect. No cheap tricks, just a well-honed plot and tension that builds throughout. 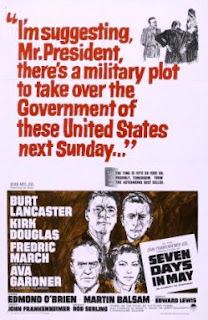 While this movie was being filmed the production staff asked for governmental assistance with locations and background information. The Kennedy White House was most helpful. The Kennedy brothers had both read and enjoyed the book and were looking forward to the movie. Not so with the Pentagon. The military demanded "approval" of the script before they would help. Frankenheimer felt that this was "covert censorship" and refused to provide them with a script.

The cast is loaded. Besides Douglas and Lancaster, Fredric March plays the President of the United States. He is superb. Just snooty enough to be a President while still seeming somewhat human. Edmund O'Brien portrays a U.S. Senator helping to stop the plot. He won a Golden Globe and was nominated for an Academy Award for this film. Ava Gardner, Richard Anderson, Martin Balsam and John Houseman, in his screen debut, all add depth to this fine suspense film. 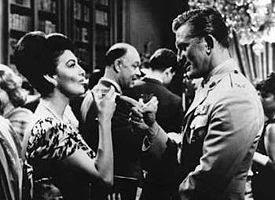 This is an intelligent political drama. Seven Days in May has a deep cast, fine direction and an intriguing script. Enjoy! One interesting note:This film was banned in Brazil upon its release. The military coup that had just taken place there was too similar to the one portrayed in the movie.

Note: I reviewed another John Frankenheimer film, 'Seconds', in my first blog. You can read it here.
Posted by CinemaSteve at 5:00 AM