All 6 Thin Man movies are on TCM today! Skip work and catch them all! 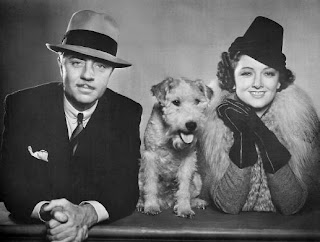 Never before nor since have two people consumed so much alcohol so successfully. William Powell and Myrna Loy team-up as the mystery solving sleuths Nick and Nora Charles. This film is based upon a novel by Dashiell Hammett. He is also the creator of the hardboiled detective Sam Spade (best portrayed by Humphrey Bogart). But in The Thin Man his crime fighters are a wealthy socialite and her former detective husband. The only things that Nick and Nora like more than solving murders are drinking and witty banter. And there is plenty of both here.

Powell and Loy are so fabulous together that most other screen couples pale in comparison. Critics loved their on-screen chemistry. Audiences so enjoyed them together, along with their dog 'Asta', that the studio made 5 more movies in this series. The thin man in the title is the victim of a murder. Nick, who has "retired" after marrying Nora, is roped into helping solve the murder. He eventually does. But the murder plot, while interesting and clever, is just the vehicle for us to enjoy this pair. Both Powell and Loy give the performances of their careers. They are fine actors with a full and rich body of work, but I don't think they could ever escape the pressure of such successful teamwork. Their timing is exquisite, their chemistry divine and their delivery perfection. Sometimes I watch The Thin Man just to enjoy their work. 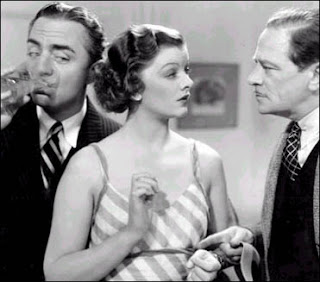 Veteran Director W.S. Van Dyke wisely lets Powell and Loy go for it. He seemingly allows two master actors who work magnificently together to run free. But unlike much of today's "improv" comedy, The Thin Man is crisp and quick. No pauses to stare into the camera nor slow deliveries here. Script writers Albert Hackett and Francis Goodrich gave them so many great lines for us to enjoy that you may miss some of them the first time through. When you enjoy this movie be sure to wait a few weeks and then try it again. I guarantee that you will then realize how much fun you missed the first time. So pull up a chair and pour yourself a stiff martini. You may not need it, but you sure are going to want one!