Since today is director Akira Kurosawa's birthday I thought it prudent to look at one of his seldom seen films. 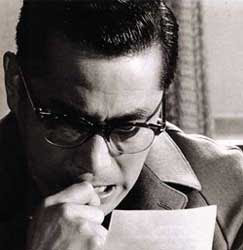 The Bad Sleep Well is a hidden gem from acclaimed Japanese director Akira Kurosawa. Loyal readers know of my appreciation for his films. I previously wrote about another over-looked film of his, 'Dersu Usala'. After watching this film, for the first time, I wonder why this film has been passed over. Kurosawa is best known for his samurai films, especially 'The Seven Samurai', and for his Shakespeare adaptations. This has the feel of both of those elements without the costumes and historic settings.

This film is set in post-war Japan. Kurosawa favorite Toshiro Mifune portrays 'Nishi', a man who is the suck-up secretary to the Vice President of a major land development corporation. We join the story at Nishi's wedding to the handicapped daughter of his boss. The V.P. is wonderfully played by Masayuki Mori. His understated evil is menacing and disturbing. Terrific acting. Everyone believes that Nishi has married this woman to further his career at the corporation. But he cares not for his career. It is vengeance he seeks! 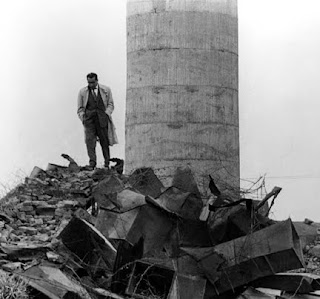 We come to learn that Nishi is actually the illegitimate son of a man who committed suicide to save embarrassment for this V.P. during a scandal involving bribes and kickbacks. Japan has quite a "face saving" corporate structure and you were expected to kill yourself before allowing disgrace to fall upon your employer. Nishi blames the officers of the company for the death of his father. He wants to expose their wrong doings and bring them to justice. Of course, without evidence this is difficult. So he has spent years working his way into the good graces and insider job. He wants them to pay. Pay for their years of graft and corruption and to pay for his father's death.

The film is a fantastic story of Nishi's manipulations of the players in his quest for justice. By working so closely with the executives he has learned many secrets. He uses those secrets to apply pressure on the corporate officers. He has been supplying clues to the local police, but they can not gather the evidence necessary for any convictions. Nishi must force "the bad" to confess. He uses all kinds of subterfuge, threats and manipulations. He later comes to realize that he too has become one of the bad. But does his end justify his means? That is for you to decide.

This is a terrific movie. Part noir, all gritty suspense, great acting and directing and Kurosawa's wonderful use of imagery. Buy this DVD today. Be sure to get the Criterion Collection DVD. As always, Criterion has done a wonderful job with the restoration of a 50 year-old film. You won't be disappointed.

There are three main points of debate about this fantastic film. Did Kurosawa borrow from Shakespeare's Hamlet for this movie? Is the opening sequence properly connected with the rest of the film? What about the ending?

Many critics compare this movie with 'Hamlet', especially the third act of the play. While I can see the connection, and Kurosawa did often use the bard for inspiration, I think that the critics are much more interested in referencing Shakespeare than was Kurosawa. Yes, he probably found some ideas to be common with Shakespeare, but almost every traditional story has those as well. Almost everything written since the 17th century has something in common with Shakespeare. But the comparisons are primarily of tone not content. 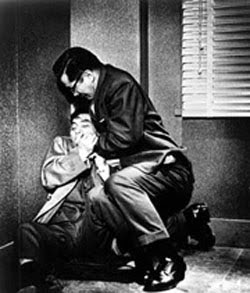 The opening sequence of Nishi and Yoshiko's wedding is also much discussed in the film world. I found it to be an important insight into the culture of Japan at the time. The extremely formal language, attention to detail and stiff setting show us how stifled life in post-war Japan could be. We learn about how someone could be willing to kill themselves before allowing disgrace to fall upon his employer. I know few today who would commit suicide instead of informing the police of the illegal actions of their boss. But that was Japan. Many critics feel that the tone of the wedding is very different from the rest of the film. With that I definitely agree. But weddings are different from the rest of our lives.

The ending. Wow! The courage it took for Kurosawa to end the film with such a twist is refreshing. The entire film points to one outcome and then we get slapped in the face. I relish when a film maker says "sorry, but all your expectations were wrong". I won't give details, but feel free to drop me a comment below or an email at stevethemovieguy@gmail.com to opine about your opinion of the ending. I think it was great.