This forgotten James Garner thriller is on TCM today.  Check it out! 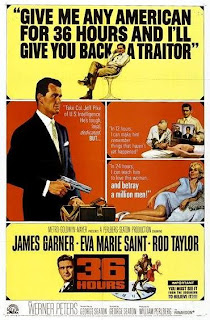 This intriguing film presents us with an interesting question. What is the most effective way to extract accurate information from a prisoner? While this film is set in World War Two the question is a pertinent today as it was in 1944. From waterboarding to drugs, sleep deprivation to beatings, interrogation remains a most difficult enigma.

36 Hours is set just days before the Allied invasion of France at Normandy. The Germans have captured Major Jefferson Pike. Pike is portrayed by one of my favorite actors James Garner. His interrogators know that the US & British forces are about to invade the European continent, but where? They have kidnapped Pike in an effort to learn of the plans. The SS want to physically torture Pike, but an innovative psychologist, played superbly by Rod Taylor, wants to use his new method. He has built a replica American hospital, filled with doctors, nurses and patients, and tries to convince Pike that the war is over and he is suffering from amnesia. Only by examining his memories can Pike be "cured". Will this American officer fall for the ruse and provide all the details of the invasion? Or should he be beaten and abused to force him to talk?

This is a simple movie done very well. Writer/Director George Seaton moves us through the film's plot with aplomb. We are presented with the concepts and then Seaton allows the fabulous cast to keep us entertained. And, as always, James Garner leads the way. Garner is one of Hollywood's most personable and entertaining leading men and he is no exception here. In support we find Eva Marie Saint and Rod Taylor. Both of them provide solid acting, but Taylor is the one to keep an eye upon. He is able to move in the world of counter-espionage and psychological manipulation in a way that makes him seem to be the hero, not the German Officer attempting to stop the Allied invasion.

This is a straight-forward thriller that provides stimulation for the intellect as well as keep you enthralled. Do you think you could be fooled by the efforts portrayed in 36 Hours?

Filmed in 1965, written and directed by George Seaton, starring James Garner, Eva Marie Saint and Rod Taylor. Look for John Banner late in the film. He went on to his biggest fame as Sgt. Schultz, "I know nothing!" on TV's long-running sit-com 'Hogan's Heroes'. I have written articles about 3 other James Garner films: 'Move Over Darling', 'Murphy's Romance' and one of my favorite films of all-time 'The Americanization of Emily'.
Posted by CinemaSteve at 10:37 AM