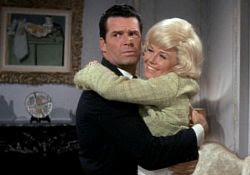 I know, I know. What's this? you say. A sappy Doris Day movie? Has Steve the movie guy gone soft? No, I still love 'Apocalypse Now' and think that Kirk Douglas as 'Spartacus' kicks butt. However, there is a place in my heart for silly romantic comedies. This one is a remake of the classic Cary Grant and Irene Dunne film 'My Favorite Wife'. The original is fun, but this is one instance where I find a remake more satisfying than the original.

Doris Day stars as a woman who has been stranded on a deserted island for five years. Her husband, played by the great James Garner (earlier blogs for 'The Americanization of Emily' and 'Murphy's Romance'), has her declared legally dead. Doris Day is rescued and returns home on the day of his wedding. This leads to a complex storyline as each of the parties attempts to get their own way. Polly Bergen is fantastic as Garner's new bride while Chuck Connors portrays 'Adam'. Adam was the only other person on the island with Doris Day for those five lonely years. How did Doris Day and Chuck Connors spend 5 years on an island alone? What did they do all day? And can Garner extricate himself from his new bride to return to his first love? As we know all along, Garner and Day still love each other and belong together, but obstacles abound. 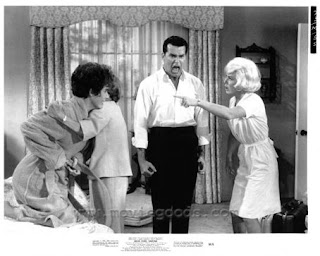 As I have admitted previously, I have a "man-crush" on James Garner. He is able to carry a movie no matter the plot or script. Great smile, charisma to spare and an ability to draw in the viewers. He makes any movie worth seeing. However, in Move Over Darling there is more than just Garner. Day plays her usual chaste self with aplomb. The supporting cast here is strong. Along with Bergen and Connors, the always wonderful Thelma Ritter plays Garner's Mom while Don Knotts is corralled into being a stand-in for 'Adam' that Doris Day hires to help with Garner's jealousy.

This remake was originally intended to star Dean Martin and Marilyn Monroe. I believe that Ms. Monroe is under appreciated for her comic talents, but the casting of Day and Garner makes this movie fun fun fun. Next time you're in the mood for a flashback to the "chaste" 60s pick up this film! I guess, at least sometimes, I am just an old softy.