In celebration of St. Patrick's Day, here is a list of some of the best films set in Ireland. Enjoy!

Far and away my favorite Irish movie. John Ford does a wonderful job in his portrayal of Irish life in a small village during an earlier era. John Wayne and Maureen O'Hara star, but the Irish village and countryside are major attractions as well. Winner of an Academy Award for Cinematography. The climatic fight scene is still studied in film schools. "Just a good stretch of the legs". 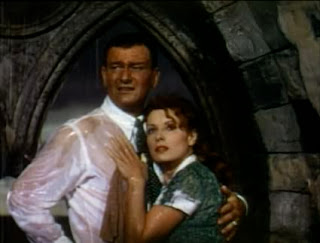 Clark Gable plays Charles Stewart Parnell. Parnell was a leader in the fight for Irish independence. This film is a terrific look at Irish history and the quest for home rule. The movie does fall into the maudlin, however. After this film bombed at the box office Gable refused to do any more "period" movies. That was a major part in his reluctance to take 'Gone With the Wind'. The history and supporting cast make this worth a look. I don't think this is available on DVD. Watch for it on cable.

Fabulous story of "the hardest working band in the world". Group of Irish individuals decide to cash in and become famous rock stars. Terrific acting, nice script and the music is first-rate. Fantastic soul soundtrack. Plus Colm Meaney. Is it possible to make an Irish movie during the last 25 years and not cast Colm Meaney? I don't think so! 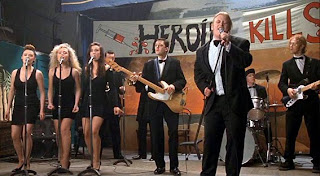 Amazing story of artist Christy Brown. Brown has cerebral palsy and can only use his left foot to create his amazing art. Daniel Day-Lewis received an Academy Award for Best Actor for his portrayal of the artist. I most appreciate that the film does not attempt to get us to like Mr. Brown. Day-Lewis plays him in a very unsympathetic way. But the power of the story overcomes some dislike of the person.

Darby O'Gill and the Little People

What list of Irish movies would be complete without a leprechaun? And this film has plenty o'them. This is the film that brought Sean Connery to the attention of the world (and James Bond producer Cubby Brocoli). And if an unbelievably young Connery doesn't get your attention, the incredibly scary Banshee will. I dare any viewer to watch this movie and not be scared by the Banshee. 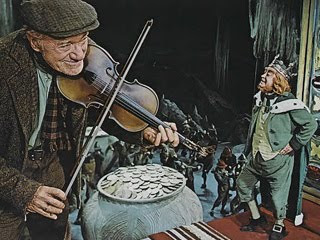 A few other films with connections to Ireland:

Braveheart - Not set in Ireland, but much of the filming was done there.
Crying Game - Amazing shock. Don't tell anyone!
Finian's Rainbow - Francis Ford Coppola films a musical?
The Englishman Who Went Up a Hill and Came Down a Mountain - Cute story of the effects a geographer can have upon a small town. Plus Colm Meaney.
Posted by CinemaSteve at 1:00 AM