Stunning documentary about a mountain climbing expedition gone horribly wrong. Two friends, Joe Simpson and Simon Yates, have been climbing together for years. They decide to attempt to become the first climbers to make it to the summit of Siula Grande, in Peru, by ascending the west face. Others have tried, but no one has succeeded. This beautiful film tells the tale of their successful ascent and tragedy filled descent.


Director Kevin Macdonald returns to the "scene of the crime" for filming Touching the Void. The natural beauty and majesty of the Peruvian Andes, with its peaks, valleys, glaciers and rugged cliff faces are the true star of this film. By taking us back to the actual location of the climb we are propelled into the story as if we were there. But I am most glad that I was not there. The story of the climbers, elated upon reaching the peak only to become lost in a blizzard soon thereafter, is so intense that I found myself leaning forward, on the edge of my seat, amazed at the events as they unfold. Having the participants tell the story, in the first person, just adds to the verisimilitude. 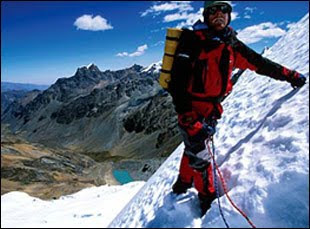 I must also give credit to cinematographer Mike Eley. The shots of the mountain, cliffs, glaciers, blizzards and the splendor of the Andes make this a magnificent treat for your eyes. This is a powerful story that needs no embellishment. The harrowing climb/decent filled with dangers and beauty make for an amazing film!

I have been on a bit of a mountaineering binge of late. A few months ago I wrote a piece about a magnificent film 'North Face' (see my article here) and I have just acquired the Clint Eastwood flick 'The Eiger Sanction' for future viewing. It seems that every few years a new film about climbing adventures surfaces. From the cheesetastic 'Cliffhanger' to classics like Spencer Tracy in 'The Mountain' you can find many interesting films and some great climbing sequences. For all you classic buffs, 'The Mountain' is finally coming out of DVD. It will be out in 3 weeks! 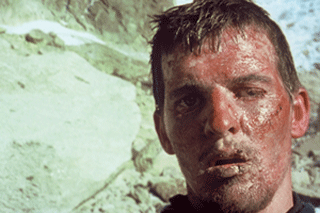 Filmed in 2003, directed by Kevin Macdonald, starring Joe Simpson and Simon Yates. For more details and info check-out Joe Simpson's book 'Touching the Void'. It is filled with many fascinating stories and details left out of the film.