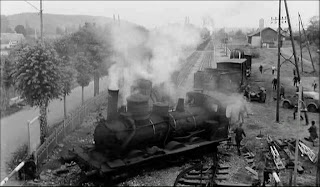 This is a most odd and excellent film. In many ways it defies expectations. It is a story of the French resistance fighting the Germans just as Paris is liberated by the Allies. But this movie is not a WW II epic. It stars Burt Lancaster. But he does not portray the typical leading man. The Train is directed by John Frankenheimer. But this film is nothing like his masterpiece 'The Manchurian Candidate' nor his hidden gem 'Seconds' (which was the subject of my first article). It is based upon a true story, but views like an action thriller. So instead of many cliches and typical/expected scenes, this film features a thriller atmosphere with unique characters and intriguing action.

The plot is simple. A German officer is stealing hundreds of rare paintings from Paris museums just as the Allies are to arrive in Paris during 1944. Picassos, Renoirs, Van Goghs, Gaugins, Cezannes and a dozen other artists for the ages. He loves the art, but convinces his superiors that the value of the paintings means they must be whisked away to Germany before the NAZIs leave France. Lancaster plays a railroad yard supervisor who is part of the French underground. The resistance wants him to save the paintings as a "national treasure". He could not care less about art and worries about who might be injured or killed in this dangerous missions just hours before they would all be liberated. But, of course, he eventually takes the mission and must stop the train from leaving France. 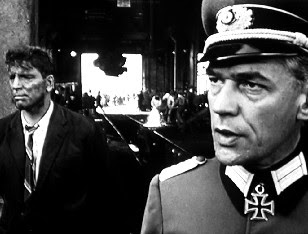 Although the plot is simple, Frankenheimer rarely is. The director weaves a fabulous action/caper thriller that features subterfuge, air raids, sabotage, hostages and a dozen other moments to keep us intrigued. I spent the entire time viewing this film with an anticipation of "what could be next?". I appreciate a movie that keeps me engrossed in the action. How could these few resistance fighters stave off the NAZIs and save the artistic heritage of a nation? I won't spoil it, but they use some very unique and interesting tricks, stunts and attacks to try to save the day. But is it possible? You will have to watch The Train to find out for sure!

No look at this film is complete without a mention of the fantastic performance by Paul Scofield. His work as the German officer hell-bent on keeping these masterpieces in his own, and by extension German, hands is powerful. You can feel his drive and desire throughout the film. The Train is almost a battle of wills between Scofield's German officer and Lancaster's French resistance fighter. And an action-packed battle it is. Also, the screenwriter's fine work was rewarded with an Oscar nomination. 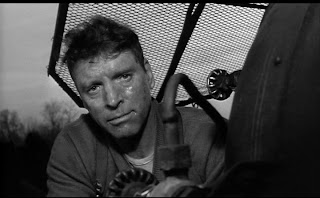 Filmed in 1964, directed by John Frankenheimer, written by Franklin Coen & Frank Davis from the novel by Rose Valland, starring Burt Lancaster, Paul Scofield, Jeanne Moreau and Albert Remy. For more info on the Germans attempts to loot the art of France and the Allies efforts to recover it, check out Valland's fantastic book 'Rescuing Da Vinci'. It is most interesting.