The Man Who Shot Liberty Valance

Upon its release, this film was panned by most critics and quickly moved to the bottom half of double features. Now, 48 years later, The Man Who Shot Liberty Valance is both critically-acclaimed and loved by viewers. This is a compelling Western, one with a depth of character and story that is often missing from the genre. This film is well written, beautifully filmed and powerfully acted. It deserves its place in the pantheon of Westerns. 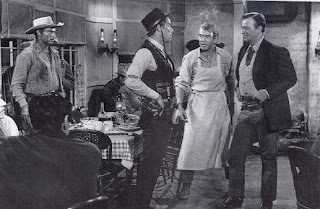 Jimmy Stewart portrays Ransom Stoddard. Stoddard has just graduated from law school and moved to the American West. He hopes to make a name for himself among the outlaws, ranchers, settlers and dreamers that populate the West. Upon arriving he takes a job as kitchen help in the town's busiest restaurant. John Wayne plays Tom Doniphon. Doniphon is the "baddest" dude in town. He is liked by many and respected/feared by all. Both Doniphon and Stoddard have their eye on the lovely woman who also works in the restaurant. She is played by the terrific Vera Miles.

The antagonist to our two heroes is the title character Liberty Valance. He is perfectly portrayed by Lee Marvin. Valance is obnoxious, foul-mouthed and very tough. Everyone, with the exception of Doniphon (Wayne), fears Liberty Valance. Valance singles out Stoddard (Stewart) for his abuse. Stoddard, being from the East, has no skill for dealing with such a person. He can neither fight nor shoot. He believes that laws and sheriffs will protect him from the wilder elements of the frontier. But the Wild, Wild West is not fully tamed. How can a city-slicker like Ransom Stoddard stand up to an outlaw like Liberty Valance? 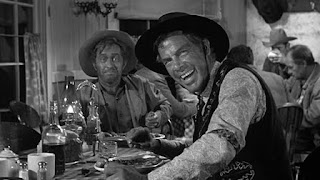 The Man Who Shot Liberty Valance is the last big western from Director John Ford. Ford is a 4-time Oscar winner that had been at the top of directors for over 20 years. His films featuring Monument Valley in Arizona had amazed viewers who had never seen such magnificent scenery before. From 'Stagecoach' to 'My Darling Clementine' and on through 'The Searchers' John Ford told amazing stories of the American West. But Liberty Valance is different from most Ford Westerns. Instead of amazing scenery and epic vistas, this film was shot primarily on sound stages. It is a personal story that focuses upon the characters. The traditional Ford cinematography is nowhere to be found. This movie tells the story of the changing West and Director John Ford changed his style to help tell that story. He returned to using black and white film. This too helps force our attention to the detail of the characters. These subtle changes in film making for Ford help to put The Man Who Shot Liberty Valance on the list of wonderful films. 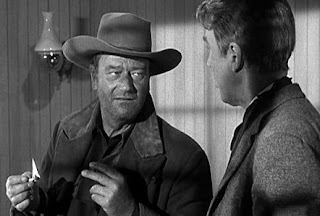 This film has everything. John Ford doing some of his best work. A terrific script filled with tension and character. Strong leading actors in John Wayne and Jimmy Stewart. A very deep cast including Vera Miles, Edmund O'Brien and Lee Marvin. It is one of the great films and should be enjoyed by all!

One story about this movie that I love. Both Stewart and Wayne were huge stars before this film was released. Who would get top-billing? Having your name appear first in the credits (top-billing) was a sign of status in Hollywood. Both actors agreed that Stewart would get top-billing in all the advertising. Things like the posters, lobby cards, etc. would all feature Jimmy Stewart above John Wayne. Wayne would get top-billing in the opening credits. This would create some balance between the two stars. At the time, most people thought that Stewart got the better of John Wayne. Many more people see the advertising for a film than see the actual film. But John Wayne got the last laugh. His name still appears above Stewart's in the opening credits on each and every DVD, video and tv screening of the film. We still see Wayne getting top-billing long after the advertising materials have all but disappeared. Never try to best John Wayne!

Filmed in 1962, directed by John Ford, written by James Warner Bellah and Willis Goldbeck, starring Jimmy Stewart, John Wayne, Lee Marvin, Vera Miles, John Carradine, Lee Van Cleef, Strother Martin and Edmund O'Brien. For more information on John Ford and his impact on film read a fantastic book by Scott Eyman 'Print the Legend:The Life and Times of John Ford'. The title of the book is in reference to a line in this movie.
Posted by CinemaSteve at 5:00 AM