Since today is Director Billy Wilder's Birthday, I have decided to rerun my post about a great movie. William Holden won the Best Actor Oscar while Billy Wilder and Robert Strauss were also nominated for this movie. Enjoy! 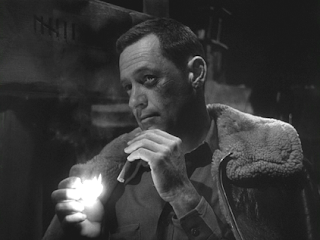 Stalag 17 is one of the few films I have ever given a "perfect" 10 out of 10. Director Billy Wilder and star William Holden have crafted a movie that can not be improved upon. The script is superb, the acting award-winning and Wilder's direction is some of the best work of his illustrious career. I have seen this movie many times and each time I am committed to the characters and the storyline.

William Holden portrays J.J. Sefton, a POW in a German prison camp in the winter of 1944. He is the "scrounger" and a general self-centered malcontent. He can obtain goods that the other prisoners can not and is willing to barter with the German guards. This creates a lot of envy and suspicions amongst the other prisoners. When two escaping prisoners are killed Sefton is suspected of being a "snitch". The other prisoners ostracize him and some even wanted him killed. But is he the informer? And, if not, who is? 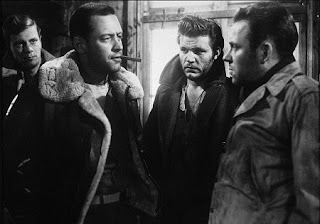 Holden plays Sefton to perfection. He comes across as uncaring, smug and egotistical. He is, at times, hard to like. But just because you don't like someone or don't appreciate their personality does that mean they are evil and not to be trusted. The basic questions of human understanding, equality and tolerance are raised from a very unique perspective. After reading the script Holden refused the part. He did not want to play such an unlikeable character. The studio had to require him to do the movie. He was rewarded with a Best Actor Oscar. He had previously worked with Director Wilder on Best Picture nominee 'Sunset Blvd.' to rave reviews and box-office success. The two are fantastic together. Both films are terrific and should be enjoyed by many.

There is also a terrific supporting cast. Peter Graves, Otto Preminger and Don Taylor head up this ensemble. I grow emotional, with each viewing, as Graves actions unfold. But this is definitely a William Holden film.

Filmed in 1953, directed by Billy Wilder, written by Wilder and Edwin Blum from the play by Donald Bevan and Edmund Trzcinski, starring William Holden, Otto Preminger, Don Taylor and Peter Graves.
Posted by CinemaSteve at 4:02 PM