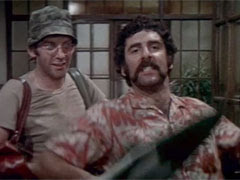 If you are a big fan of the television show be forewarned. This film, from Director Robert Altman, is much darker than the tv show. There is drinking, sex, drug use, racial stereotypes and all sorts of other "politically incorrect" things. It is full of black comedy, sarcasm and biting satire. I believe that Altman, screenwriter Ring Lardner, Jr. and novel author Richard Hooker are making a strong statement about war and how individuals survive armed conflict. The characters in M*A*S*H use that dark comedy to somehow manage to get through the pressures of war. Unless you have been through it, I don't think anyone can understand how awful things can be. But everyone involved is attempting to survive the horrific experience. "Gallows" humor and dark comedy are many individuals coping mechanism. This film reflects that survival technique to maximum effect.

M*A*S*H is set during the Korean War. The film follows the story of the 4077th Mobile Army Surgical Hospital. I use the term "follows the story" loosely. This film is more a collection of vignettes than a cohesive plot. Some moments are more poignant or funny than others, but the film in total is Robert Altman's best work. He allows the actors to develop characters with which viewers can relate on a personal level. This almost improvisational technique results in fun and challenging chaos on screen. You may find one episode better than another, but the film is funny! 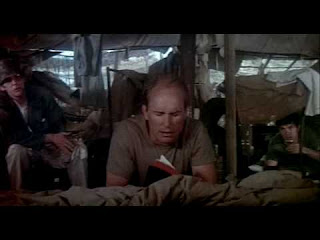 Altman has a history of using ensemble casts. He does so here with some of the generation's best actors. Donald Sutherland (Hawkeye) and Elliott Gould (Trapper John) play two doctors who were drafted into serving in the military. They use copious amounts of alcohol to numb themselves to the carnage. Robert Duvall portrays Major Frank Burns. Burns is the "regular army" antagonist to our two doctor protagonists. He is the constant butt of jokes and ridicule. Other fine actors are also in M*A*S*H. Tom Skerritt, Rene Auberjonois, Roger Bowen and Sally Kellerman all have prominent roles. Director Altman uses this terrific cast to excellent results. Whether you prefer the football sequence, "Hotlips" scenes, the surgeon's visit to Tokyo or the "suicide is painless" vignette there is something to entertain everyone.

Although the film is set during the Korean War it was filmed and released during the height of the Vietnam War (1970). There was much attention, both pro and con, heaped upon this film as a metaphor for Vietnam. There are portions of this film that provide support to both sides of the stay in Vietnam debate. Some people boycotted the movie because it was "communist sympathizing". I never found that to be true. M*A*S*H shows that war can be horrific and that, sometimes, the people in command make terrible decisions. It also makes a strong statement that most people involved in a war would rather be at home. That's not "communist". I think that is just real.

The cast is excellent, the directing is terrific and the script is hilarious! 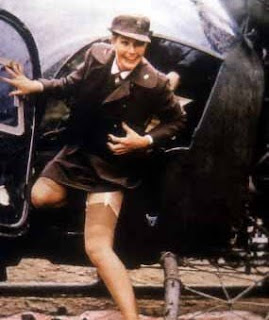 One note: Sally Kellerman has a very brief nude scene. She was 33 at the time. A few years ago she appeared nude in 'The Boynton Beach Club'. She was 69 for that nude scene. Good for her! That takes courage. It is probably much easier for a 33 year old woman to do a nude scene than someone who is 69. But she is not backing down to anyone or any year.