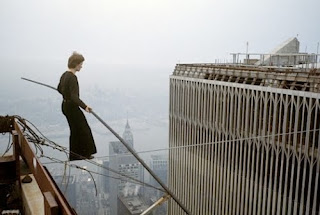 In 1974, Philippe Petit and 5 accomplices snuck into the World Trade Center towers 1 & 2. Under the cover of darkness they strung a cable between the two buildings. After the morning light of dawn arrived Petit began walking on that wire. He proceed to wirewalk, at over 1,300 feet, between the buildings 8 times. Upon returning to the roof of tower 1 he was promptly arrested. This documentary is the story of his life and of the planning, staging and results of this daring adventure.

Film maker James Marsh does a wonderful job of weaving interviews, home movies, recreations and home movies to tell this fascinating tale. The film that Petit and his team took from the top of the towers is worth the price of admission alone. Marsh and editor Jinx Godfrey do a wonderful job of weaving this tale for our benefit. But it is wirewalker Petit that is, of course, the star. He tells the story with a joy that was gained by being free from the Earth as he walked that wire.

Man on Wire won the Oscar for Best Documentary in 2009. Deservedly so! Petit wrote an intriguing book, 'To Reach the Clouds', upon which much of this film is based. If you find the documentary interesting, which I most certainly did, then I suggest you obtain the book as well.
Posted by CinemaSteve at 2:21 PM