This is a fabulous documentary about the race for Mayor of Newark, New Jersey in 2002. The election pitted City Councilman Cory Booker against the 4 term, incumbent Sharpe James. As this documentary shows, James headed a powerful and corrupt political machine that brought to bear its full weight in an effort to defeat Councilman Booker. It is amazing to see such corruption and election distortion in modern America. At one point the film shows an editorial from a newspaper entitled 'Newark, Zimbabwe'. While I know that all kinds of intimidation and distortion happen in all elections, to see it, on video, happening in New Jersey is quite enraging. I found myself surprised, angry and disappointed that such things still occur. When city workers, on the taxpayer payroll, use city equipment to remove and destroy the Mayor's election opponent's signs and billboards I was quite disturbed. That they did it in front of cameras and in spite of a court order made it enraging. 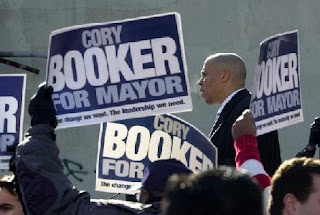 Film maker Marshall Curry does a fantastic job of removing himself from the documentary. He was threatened, repeatedly, by police and city officials for videotaping the Mayor (in public!). Yet he continued to keep the focus of the film upon Booker, James and the election itself. He was nominated for an Academy Award for this outstanding film. I believe that you too will be amazed, and a little outraged, at the unbelievable lies, corruption and intimidation that occur. One element featured is the black-on-black racism. Mayor James repeatedly attacks Councilman Booker for not being black enough. Although Booker is African-American, he is light-skinned and educated at top universities. This makes his "street credibility" suspect and, therefore, open to attack by the darker-skinned Mayor. Street Fight is one fantastic documentary!

Filmed in 2002, written, filmed and directed by Marshall Curry.
Posted by CinemaSteve at 2:10 PM