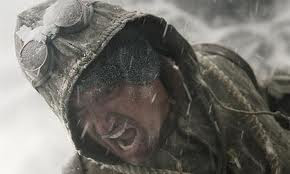 This movie is intense! Some of the reviews upon its release include quotes like "Heart Pounding" (Boston Herald), "Bone Chilling, Unbearably Riveting" (Chicago Sun-Times) and "The Suspense is Relentless" (Washington Post). And I concur with those comments 100 percent. The climbing sequences are intense, riveting, chilling and relentless. The tensions build throughout the film towards an amazing finish.

North Face is a German film that tells the true story of a group of mountain climbers in 1936. From across Europe, different teams of men attempted to become the first to climb the North Face of Eiger in the Alps. Two of Europe's most celebrated climbers had died attempting this climb the previous year. During 1936 the shadow of war was descending upon Europe as the Nazis continued to expand their power. Millions of people lived in fear of a possible war to come. The Nazis wanted a German team to be the first to conquer this mountain climb. They intended to use this as propaganda, further proof of the "superiority" of the German people. These events also take place just before the German Olympics in Berlin. If the German team attempting to climb the North Face could reach the summit first they would be celebrated across Germany. 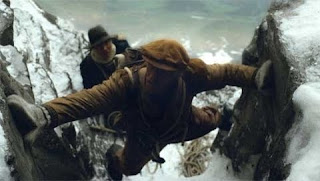 However, the film uses the tensions in Germany and Europe as a backdrop for a story that is so intense that to include more could stifle the viewer's ability to relate. The film focuses upon the German climbers Toni Kurz, played by Benno Furmann, and Andreas Hinterstoisser, portrayed by Florian Lukas. Both actors do a fine job in the most difficult of cinema circumstances. But it is the directing and cinematography that dazzle. The story of the climb, the heights, the wind, the cold, the isolation, is what makes this movie so personal and so powerful. The director Philip Stolzl and the cinematographer Kolja Brandt do fantastic work. The story is riveting and they let the story unfold. The climbing scenes are fantastic. I felt as if I was on the side of that treacherous mountain. You will too! Filmed in 2008, directed by Philip Stolzl, written by Stolzl, Christoph Silber, Rupert Henning and Johannes Naber, starring Benno Furmann, Florian Lukas, Johanna Wokalek and Ulrich Tukur. For a detailed look at the early climbers and what they faced at Eiger try 'The White Spider' by Heinrich Harrer. Harrer successfully summited the North Face in 1938. Tweet
Posted by CinemaSteve at 5:00 AM