The Thing from Another World

This sci-fi classic is on TCM on Saturday. Don't miss it! 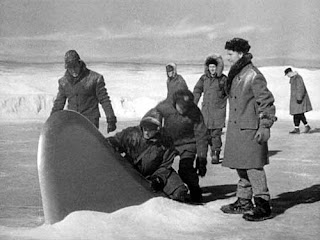 This is a wonderfully tense science fiction film. Made in 1951, it set the standard for dozens of film that followed. This movie has almost every character that would become so familiar in future films. The military officer that is sure the visitor from another world is hostile, the scientist that is sure that the visitor is wise, caring and misunderstood, the reporter that cares about nothing but getting the story, etc. They are all here. But when writer/producer Howard Hawks and director Christian Nyby made The Thing from Another World these characters weren't cliches. They had yet to become standards. This movie made them so.

The Thing is an alien who has crashed his spaceship in the arctic. A science outpost has witnessed the crash and they have called in the Air Force. Upon the military's arrival they "take over" and start running the show, much to the scientist's dismay. The air force and the scientists pull a "body", encased in a block of ice, from the crash site. They drag the ice-encrusted alien back to camp. And that is when the fun begins. The humans all believe the creature has died in the crash, but, of course, he springs back to life to terrorize the inhabitants of this outpost. A huge storm blows in and they are cut off from communicating and rescue. Is the alien dangerous or misunderstood? Should they kill the creature or, perhaps, sacrifice themselves to save our first contact with an alien race? How can you deal with a life form with which you can't communicate nor injure? 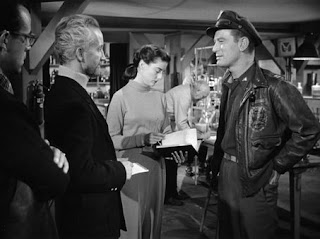 Much is made of the question Who actually directed this movie? Veteran Howard Hawks co-wrote and produced this film. It came from his company. This is credited director Christian Nyby's first film. It is far and away the best thing he ever did. Nyby had worked as an editor and cinematographer for Hawks for years. Nyby won an Academy Award for editing Hawks fabulous 'Red River'(see my earlier blog). At the time, science fiction was looked down upon by Hollywood executives and critics. Did Hawks want to avoid the criticism for making a sci-fi film? Was he hoping to boost his friend's career? Neither of them ever answered the question directly. After watching it is clear that Hawks' influence can be seen throughout the movie. The tense storytelling, the simultaneous speaking of multiple characters, the linear plot and the use of unseen images to heighten suspense are all marks of Hawks.

Whom ever did the work, or perhaps the teamwork itself, he/they created one of the great science fiction films. A true cult classic. Also, give a listen to the score. 4-time Oscar winner Dimitri Tiomkin's eerie score is also a precursor for much of the music used in science fiction films to follow.