This is an updated rerun of my very first post. Just in case you missed it! 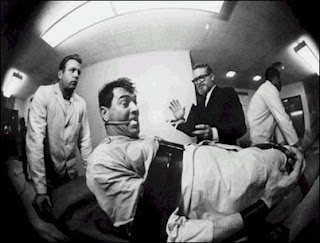 Just finished a seldom seen movie from the 60's, John Frankenheimer's Seconds. Starring Rock Hudson, this is like a feature-length episode of the Twilight Zone. If you can move past the relatively slow opening pace the film provides some intriguing twists as well as lots of unique camera work and music.

A banker (played by veteran character actor John Randolph) gets the opportunity to transform his life into "what every man wants:complete freedom!" He takes this chance and becomes a swinging bachelor (played by Rock Hudson). The twists are sure to make Rod Serling's heart proud. Make sure you stay through the finish!

Rock Hudson's performance is unlike anything else I have seen. This film may not be up with Frankenheimer's masterpiece The Manchurian Candidate, but it is well worth seeing. Frankenheimer digs deep into his bag of tricks. By using black and white to create stark shadows he creates a surreal atmosphere. He also uses unique camera angles, wide-angle lens' and odd staging to keep the viewer off balance.

Filmed in 1966, Directed by John Frankenheimer, written by Lewis John Carlino, starring Rock Hudson, John Randolph, Salome Jens and Will Geer. The screenplay is based upon the novel by David Ely.

Posted by CinemaSteve at 2:46 PM