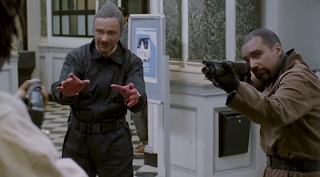 I am a huge fan of caper flicks. Almost any film that involves a complicated robbery appeals to me. So, to be honest, I am a bit biased when it comes to this film. But I found Daylight Robbery to be interesting and worth a viewing. A semi-true story of a London bank heist of millions of Pounds during the 2006 World Cup, Daylight Robbery is a caper flick from beginning to end. The film opens with the robbers preparing their getaway and then heading off to the bank. No long back story of how or why they decided to commit this felony, just the story of the bank heist itself.


Director/Writer Paris Leoni does a fine job of keeping us intrigued. How can these guys possibly believe that they will succeed? They must have a plan, as yet unrevealed, to escape with all that money. Can the police foil the plot? Can the viewer stay one step ahead of the criminals in their master plan?

One proviso; if you have difficulty with British accents you may wish to skip this film. All the characters have heavy, working-class British accents that may make it hard to understand every phrase being uttered. But, most of the time, the dialogue is secondary to the plot. The robbery is the star of this film and it will keep your attention throughout. If you enjoy caper or heist flicks check out my previous articles about some other great robbery-themed films via these links:
The Thin Man, The Anderson Tapes, Charlie Varrick, Quick Change, The Silent Partner and Thunderbolt and Lightfoot.

Filmed in 2008, written and directed by Paris Leoni, starring Geoff Bell, Robert Boulter, Vas Blackwood and Leo Gregory.
Posted by CinemaSteve at 5:00 AM