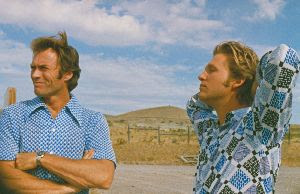 This film is a combination of some of the most successful genres in cinema. Part caper flick, part "buddy" movie and part road film. Director Michael Cimino, in his directorial debut, fuses all three genres together to create one movie that excels in all three categories. Too often ambitious scripts and directors get lost in trying to do everything. But here, in Thunderbolt and Lightfoot, we have success in making a smart, interesting and compelling film.

This movie follows the exploits of Thunderbolt, played by Clint Eastwood, and Lightfoot, portrayed by Jeff Bridges. Eastwood is a bank robber who is returning to collect the loot from an earlier theft. Bridges plays his very irreverent and quirky friend who wants to be in on the action. They have to "put the band back together" and find the men who assisted in the original robbery. George Kennedy and Geoffrey Lewis play the ex-partners. Both Kennedy and Lewis do terrific jobs, but Bridges almost steals the movie. Admittedly, because of the wild nature of his character, his part is the most flamboyant. But Bridges does a wonderful job of making Lightfoot accessible to the audience. He was rewarded with an Academy Award nomination for Best Supporting Actor. 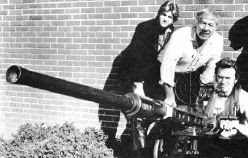 Clint Eastwood met writer/director Cimino while Cimino was doing a re-write on one of the Dirty Harry movies. He pushed the studio to allow Cimino the opportunity to make this movie. Cimino gets a terrific performance out of Eastwood in return for Clint's faith. Eastwood, as Thunderbolt, is more personal and accessible than usual. With this coming during his Dirty Harry period, audiences were not prepared for this kind of a Clint Eastwood. That hurt the film at the box office. But the cult following for Thunderbolt and Lightfoot shows the value of the effort. Cimino's next film, 'The Deer Hunter', won Best Picture and earned him a Best Director Oscar. Then came 'Heaven's Gate'. The problems of budget, ego and horrible box office of 'Heaven's Gate' made Cimino persona non grata in Hollywood for almost a decade.

One character that is not mentioned in the credits, but deserves a mention here, is the big sky country of Montana. Cimino uses the mountains, vistas and prairies as an important part of the story. The cinematography is beautiful. I have since visited Montana. It is a most amazing place. The sky looks endless and makes all things seem possible. That confidence and beauty come across on screen. Magnificent country! 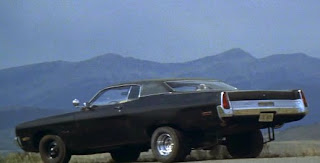