Stranded:I've come from a plane that crashed on the mountain 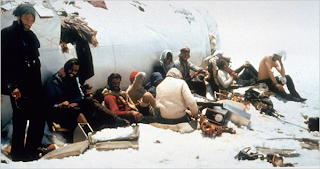 In 1972 a plane carrying an Uruguayan rugby team crashed on its way to Chile. Most of the crew and passengers survived the crash and attempted survive. This films is a compilation of interviews with some of the survivors.

Stranded is one of the most interesting documentaries I have seen in some time. By giving us the first person perspective of that terrible crash and ordeal I felt personally involved in the struggle. This story was first told in the Piers Paul Read book 'Alive' which was then made into a 1993 theatrical release starring Ethan Hawke. This documentary shares the interviews with the survivors as they tell the story in their own words along with some excellent recreations.  It also includes some of the actual photos taken by those survivors at their camp high in the Andes as well as some news footage of their rescue and eventual confession of the horrors they endured.

Documentaries have the ability to tell a story in way that transfers emotion and situation that no drama can. This terrific and intense film gives us almost more emotion that one can take. To see people talk of the difficulty in considering cannibalism vs. starvation, life vs. death, sacrilege vs. faith is, at times, difficult to take. But the strength and openness showed by the survivors is a story that is, ultimately, life affirming. I highly recommend this outstanding film. 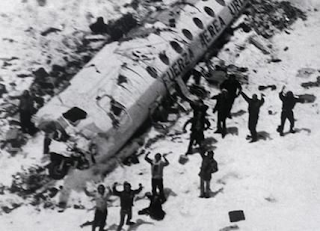 The writer/director Gonzalo Arijon understands the power of the narrative and allows the participants to speak for themselves. They take some of the survivors, along with their families, back to the crash site to further illustrate the event. Arijon is better known for his socialist leader's study 'Eyes Wide Open', but this is his best work.

Filmed in 2007, written and directed by Gonzalo Arijon, starring some of the survivors of the Andean plane crash.  It is in Spanish with sub-titles.
Posted by CinemaSteve at 5:15 AM