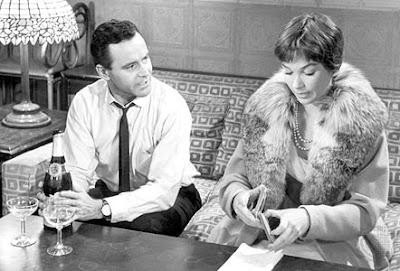 Jack Lemmon plays C.C. Baxter. Baxter works at desk number 891 on floor number 19 for one of the largest insurance firms in the world. His desk sits in the middle of a giant room full of desks. Each is home to another worker just like him. C.C. Baxter often stays late, working without overtime pay, to get things done. He is a responsible, well-liked, anonymous cog in a giant insurance machine. Yet, C.C. Baxter is getting positive reviews and references for promotion from executives throughout the company. Many of the senior executives know C.C. Baxter and he is in contact with execs all over the firm. 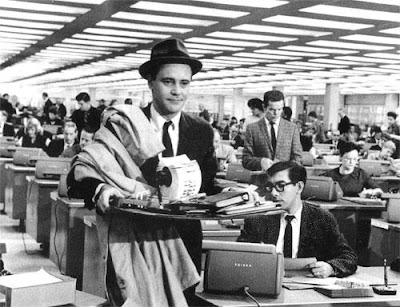 Fred MacMurray portrays Mr. Sheldrake. He is the president of this monstrous insurance company. He wants to know why so many executives, from different divisions, are giving Baxter glowing reviews. Why are these execs pushing for Baxter's promotion? Earlier in the firm's history a similar story played out. In that case, the junior nobody was running a book-making operation and taking bets from all the other employees. What is the story with Baxter?

Shirley MacLaine plays Fran Kubelik. She is an elevator operator for the firm. Everyday dozens of employees ride her elevator to and from their offices. She is cute, personable and most witty. She avoids all the advances from every executive as they try different ploys to get her to go on a date. The fact that most of them are married doesn't seem to slow down her would-be suitors. But, so far, she seems to have avoided all entanglements. 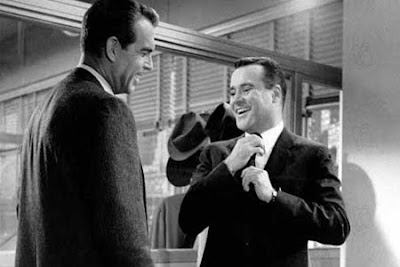 Baxter has chosen an interesting path to success. He lends out his apartment to executives at the firm. They use his place to rendezvous with their mistress. This makes him very popular. In exchange, they give Baxter glowing performance reviews and recommendations for promotion. He is soon on the fast track to the top floor. Since he lives alone and has little company the situation seems to be perfect. But he develops a fondness for Miss Kubelik. He is now torn between pursuing the lovely and witty elevator operator and advancing his career. When the head of the company, Mr. Sheldrake, wants to use his apartment the choice becomes even more difficult.

Billy Wilder directed and co-wrote The Apartment. He was coming off the giant success of 'Some Like it Hot' (my review) and was on top in Hollywood. He teamed with his co-writer I.A.L. Diamond for this sarcastic yet warm comedy. Casting Jack Lemmon was his best decision. Lemmon can toss-out one-liners with the best. He has impeccable timing and uses subtle voice and volume changes to deliver lines at their sarcastic best. In this movie, he is a character with which the audience can relate. We want him to succeed, to find happiness and love, to move beyond his lonely existence. Shirley MacLaine is fantastic. A truly wonderful, understated performance. She portrays the woman with a tough exterior covering for her disappointment with life to perfection. Also, Fred MacMurray plays the philandering husband with a zest that is spot-on. He is a cheating wretch, but he is also charming. You can see why women would be interested even while they know it is not going to go well. 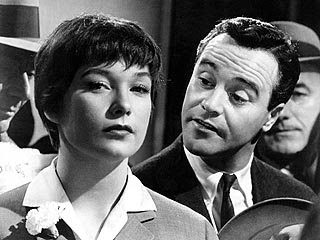 Wilder's direction, along with his script, is wonderful, as always. Wilder won 6 Oscars in his life with 3 of them coming from this film. The Apartment won Best Picture while Wilder won Best Director and for Best Screenplay. His name is littered throughout my website. He also directed 'Double Indemnity', 'Some Like it Hot', 'Witness for the Prosecution' and 'Stalag 17'. I can safely say that if you are considering watching a movie that is directed and/or written by Billy Wilder you should get it. You won't be disappointed!

Jack Lemmon as C.C. Baxter faces a tough choice in The Apartment. He must choose between his career and love. You, however, face a simple decision. Should I watch this move today or tomorrow?

Filmed in 1960, directed by Billy Wilder, written by Wilder and I.A.L. Diamond, starring Jack Lemmon, Shirley MacLaine and Fred MacMurray.
Posted by CinemaSteve at 11:48 AM