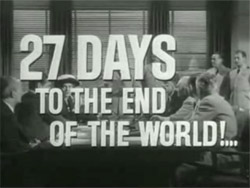 I love 50's Sci-Fi.  Science Fiction has the ability to look at complex social issues without driving everyone away.  The 1950s saw major changes in both American society and international relations.  But because this movie features an alien that is attempting to trick Earthlings into ending our existence, complex issues are discussed without creating distrust nor aversion.  This film is rarely shown on cable so should purchase, rent or Netflix the DVD.

The 27th Day is a simple film telling a simple story.  An alien "beams-up" 5 people to its space craft.  These are people of different religions, incomes, genders, abilities and nationalities.  The alien gives each of these pill a set of 3 devices.  Each device, if activated, will vaporize all human beings without a certain distance of any point on Earth.  Because this film was made at the height of the cold war it features characters from behind the Iron Curtain as well as Westerners.  Each of the 5 individuals must decide, for themselves, what to do with these devices.  No one else can access them.  The film follows the paths of these five people faced with a life vs. death decision for millions.  To pressure these people the alien informs the world that they have these devices.  Soon the entire planet is on a hunt to locate these chosen five and their alien machinery.

Director William Asher worked primarily in television.  Given the opportunity to direct a small-budget film he uses a direct style that moves the film along crisply.  Screenwriter John Mantley adapted the script from his own novel.  He also worked primarily in television.  Their collaboration results in an intriguing, face-paced film of only 75 minutes.  Not only is the cold war part of the story, but The 27th Day also looks at race relations, good vs. evil and other immortal quandaries under the cover of Science Fiction. 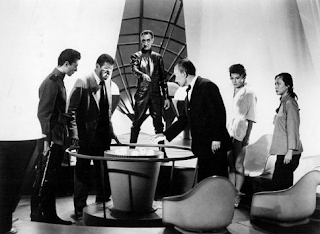 The decision to cast Gene Barry as the lead is a sound one.  He was already well-known for an earlier Sci-Fi flick 'The War  of the Worlds' that was well-received.  He is accompanied by a little-known cast each chosen to represent a specific portion of humanity.  The cast is fine, but it is the plot and its conundrums that are of import.

Filmed in 1957, directed by William Asher, written by John Mantley, starring Gene Barry, Valerie French, George Voskovec and Arnold Moss.  For a look at some other 50s Sci-Fi you can click on these links:'Forbidden Planet', 'Panic in the Streets', 'The Thing from Another World', and 'The Day the Earth Stood Still'.
Posted by CinemaSteve at 11:03 AM