Since this film is featured on TCM tonight, I decided to post my article about this sci-fi classic again. 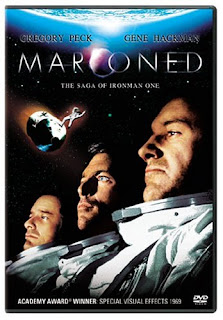 This is a film that is begging for a remake. The plot is true-to-life and the tension is palpable. I have seen this movie 4 times and each time I find myself emotionally attached to the outcome. I know, logically, what is going to happen, but I still root for the success of the rescue. That is verisimilitude!

Marooned follows the story of 3 astronauts who, after 5 months in orbit, attempt to return to Earth. They are in their small, tight re-entry vehicle. But the engines won't fire and they can't re-enter the Earth's atmosphere and get home. Because of a lack of fuel they can not return to the space station that has been their home in orbit. They have only a small amount of oxygen. What can they do? Can NASA bring them home safely?

This film was made in 1969 and released just a few months before the actual Apollo 13 mission that had such similar problems. You can call it manifestation or prescience, but the scenes on the screen in Marooned were real for the astronauts of Apollo 13. I think that is part of the reason why this film has been overlooked. Since the real thing happened just a few months later, why bother with a movie? But noted director Frank Capra started on this film 5 years before. He pushed to get this movie made, but could not film it within the budgetary constraints put upon him. So he eventually faded and, to much disappointment, never made another film. This movie was directed by John Sturges. Sturges had a long and illustrious career that included 'The Magnificent Seven', 'The Great Escape' and 'Ice Station Zebra' among many successful and entertaining films. This is one of his best. The script, written by Mayo Simon is based on the novel by Martin Caidin. The script is very tight. This film has no backstory nor superfluous elements nor dialogue. I like that. Most space movies contain lots of stories about the character's lives before the space part starts. Not here. The film opens with the lift-off of the rocket. All 3 astronauts are married, so there is no need for a romantic storyline either. Just intelligent and tension-filled drama.


The special effects could use an update. Even though the effects won an Oscar in 1970, they play as slightly out-of-date. I would love to see a remake. I rarely say that about a film that I enjoy, but Marooned deserves the modern treatment. Replacing the cast, however, could be most expensive. Gregory Peck stars as the "chief" of NASA. Richard Crenna, Gene Hackman and James Franciscus portray our three marooned astronauts. Richard Janssen is the gung-ho pilot who is pushing for a rescue mission. And Lee Grant, Mariette Hartley and Nancy Kovack play the wives. That is a top-notch cast for any film. They do a terrific job of conveying to us the pressures and tensions that such a situation creates. I also appreciate the lack of a soundtrack. No music. But lots of sound effects. In space there is no singing, just lots of small noises. Too many directors feel that they must use music to tell us when we should be scared, or emotional, or excited. Sturges has the dialogue and actors tell the story, not the composer.


Spoiler Alert: Don't read on if you have not seen the film.

Even though I have viewed Marooned multiple times, I still get upset about which characters are rescued and which perish. If anyone is to die I want it to be the self-centered, wimpy guy and not the hero. I'm just saying.
Posted by CinemaSteve at 4:45 PM