Three are 3 fantastic reasons to see One, Two, Three.

This hilarious film is based upon a play by Ferenc Molnar and was adapted for the screen by Billy Wilder and I.A.L. Diamond. It is tight, quick and quite funny. The lines are thrown at the viewer in rapid-fire succession. The first time you watch the film you will miss some of the jokes because you are chuckling, snorting or laughing out loud at the joke previous. The second half of this film reminds me of 'Airplane' by Zucker/Abrams/Zucker. They just throw joke after joke at you and let you pick out what you enjoy. The film has intellectual jokes, political puns and slapstick humor all combined. Diamond and Wilder collaborated on some of our greatest films. They combined on 'Some Like it Hot', 'The Apartment', 'Irma La Douce' and 'The Fortune Cookie' among others. Great fun!

Directed by master film maker Billy Wilder, the pace of One, Two, Three is frenetic in its slow parts. There is so much energy going that I feel for the actors during filming. But instead of pausing for laughs, as so many modern "comedies" do, Wilder just keeps the jokes coming. Missed one? Don't worry, there are more on the way. Quickly! He uses a deep cast to move the story along. Anne Francis, as the executive's wife, is put to particularly good use. Extremely dry, almost dead-pan, in the delivery of biting social satire. Fabulous! 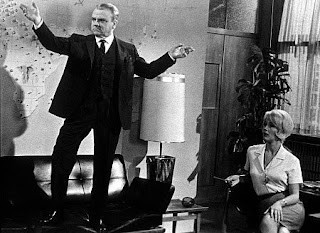 Cagney is best known for dramas. But his comic timing here is fantastic. It is his power, on screen, that keeps the movie jumping. No time to revel in the punchline, it is on to the next moment. He is loud, obnoxious, overbearing and perfect for this role. It is wonderful to see an actor best known for heavier roles pull off a comedy with such apparent ease. 1962 was a deep year for acting Oscar nominations with 'Judgement at Nuremberg' and 'The Hustler' both having terrific performances, but Cagney deserves mention for this film. Comic performance rarely get notice by the Academy. That is too bad.

Filmed in 1962, directed by Billy Wilder, written by Wilder, I.A.L. Diamond from the play by Ferenc Molnar, starring James Cagney, Anne Francis, Horst Buchholz and Pamela Tiffin. For an amazing look at Billy Wilder get the book 'Some Like it Wilder:The Life and Controversial Films of Billy Wilder' by Gene Phillips. It makes for fascinating reading for any film aficionado.
Posted by CinemaSteve at 10:48 AM