Thank You for Smoking

Since today (Oct. 19th) is director Jason Reitman's birthday, it only seemed appropriate to write about this fantastic satire. 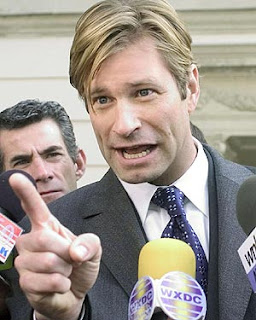 This is laugh-out-loud satire. It is biting in its sarcasm and bulls eye accurate in its spoofing of the political correctness movement. The humor is dark, which is just the way I like it! There must have been a dozen moments in which I thought "thank you for saying that". Too much of our society has been cast asunder in an effort to never offend, bother or upset another person. I welcome offense, celebrate bother and, to anyone who wishes to offend me, I say "good luck". Let's celebrate our differences, even those that are upsetting. It is our differences that make life interesting.

Thank You For Smoking follows a tobacco lobbyist/spokesperson as he attempts to persuade the public that smoking just might not be as bad as everyone wants you to believe. Aaron Eckhart plays Nick Naylor, the lobbyist for tobacco companies. He travels America, giving speeches, debating on television and all-in-all battling for the right to smoke. A fictional Vermont Senator, portrayed by William H. Macy, decides to put a poison label on every pack of cigarettes. The two of them battle for public opinion. Naylor takes up with an attractive reporter, played by Katie Holmes, who later betrays his trust and spills all of his dark secrets. Naylor does his job and spins the tobacco story while trying to remain a role model for his twelve year old son.

Aaron Eckhart says that after he read this script he dropped out of another project to play Nick Naylor, heroic tobacco spin-doctor. I believe that almost every actor involved felt the same way. So much of this script is fabulous. Every character has at least a few terrific lines to excite the actor. This film was written and directed by Jason Reitman. He has since gone on to write and/or direct the box office hits 'Juno' and 'Up in the Air'. The hard-hitting sarcasm in this movie is fantastic. But the film also has a personal and sentimental side. The relationship between father and son is touching. 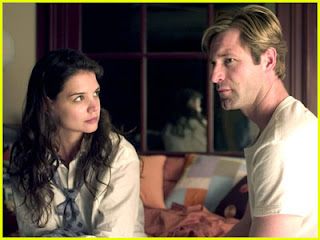 The film is based upon the best-selling novel by Christopher Buckley. Both Reitman and Buckley are the sons of big names in their fields. Jason is the son of Writer/Director Ivan Reitman while Christopher is the son of Author/Columnist William F. Buckley. Perhaps there is genetics at work? Even though the novel was a best-seller it took almost 15 years for the book to hit the big screen. The Hollywood studios must have decided that it was too "sensitive" a subject about which to make a film. There have been six disgusting films in the 'Saw' series, but a look at lobbying, tobacco and political correctness is too sensitive? In what world do movie executives live?

There are many wonderful performances in supporting roles. Besides Eckhard, Holmes and Macy, JK Simmons, Robert Duvall, Sam Elliott and Rob Lowe all have terrific parts. I am certain that they all jumped at the chance to be in Thank You For Smoking. This kind of ensemble film, with a fantastic script, must be an actor's dream. I believe they enjoyed being in this movie as much as I enjoyed watching. 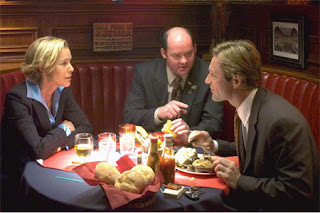 Writer/director Jason Reitman has a wonderful quote about his films. "I don't want to make films that give you the answer. If there is a message to my films - and I hope there isn't - it's to be open-minded." I couldn't agree more!