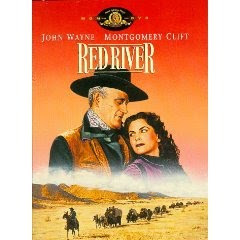 This is the film that turned John Wayne from an actor into John Wayne the on-screen force. Before Red River, John Wayne was already a movie-star. Stagecoach had seen to that. And he was an academy award nominee. Sands of Iwo Jima had seen to that. But the persona that we know as John Wayne had yet to develop on screen. Red River changed everything. Wayne portrays Tom Dunson, a hardworking, no b.s. rancher who decides to lead his massive cattle herd on a long cattle drive. His ward Matt Garth (played in his first film by Montgomery Clift) is his lead assistant. When Clift feels Wayne is being dictatorial and oppressive he takes the herd away from Wayne and leads the drive himself. Wayne vows vengeance and pursues Clift and his herd along the Chisum trail.

This film is often called 'The Mutiny on the Bounty' set in the American West. The comparison is accurate, but incomplete. Except for the climactic ending the stories are very similar. But I find Red River to be about opposites. Older & grizzled John Wayne vs. young & attractive Montgomery Clift. Take no prisoners employee management vs. an inclusive management style. Follow orders vs. question authority. Risk vs. reward. Questions that still intrigue us today.

Director Howard Hawks does a fantastic job. The characters are deep and real, the photography is spellbinding and the acting he gets from Wayne and the cast are first-rate. Few critics consider John Wayne to be much of an actor, but he sure does a fantastic job in Red River. Clift, in his debut, is compelling as the heir apparent that rebels against the very man who saved him. Walter Brennan, Noah Berry, Jr. and John Ireland are also featured. The score, by Dimitri Tiomkin, adds a wonderful, western feel.

Even if you are not a fan of John Wayne you should enjoy this film. Red River is a classic American western!

Posted by CinemaSteve at 2:48 PM