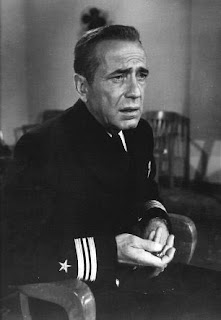 Before this film could be released the U.S. Navy required a disclaimer be placed at the opening of the film. The Navy wanted to be sure that every viewer understood that The Caine Mutiny is fiction and not based upon an actual mutiny. The Navy originally withheld any cooperation because of this concern. But the popularity of the book upon which the film is based, along with the fact that Humphrey Bogart would star, eventually changed the Navy Brass's minds.

Humphrey Bogart stars as Captain Queeg. He is the Captain of a U.S. Naval vessel during World War II. His senior officers, portrayed by Van Johnson, Fred MacMurray and Robert Francis, come to believe that Queeg is incapable of commanding a ship under the pressure of war. After some bizarre behavior by Captain Queeg they decide to relieve him of command. Two of them are tried for mutiny and are defended by Jose Ferrer. The courtroom sequences would later be produced as a Broadway play, but on screen we get to see the entire story. 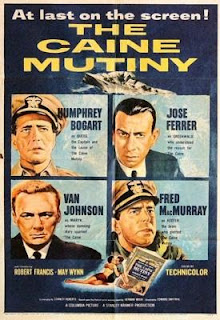 Bogart is fantastic. In his last great performance he plays Queeg with aplomb. Some of Bogart's mannerisms and quirks are still used by actors and comics today. Bogart's willingness to play someone so unpopular is refreshing. Many of today's leading actors should consider this performance. Also excellent is Fred MacMurray. He plays the slimy Lieutenant Keefer. Keefer is a writer outside of the navy and is the driving force in convincing the rest of the officers that Queeg must go. But in the moment of truth he fails to support his fellow officers. Under appreciated Jose Ferrer carries the courtroom portion of The Caine Mutiny. He rarely fails to deliver top-notch work. This is no exception. His dedication to defend the mutineers makes the second act fantastic.

The novel, written by Herman Wouk, won the Pulitzer prize. The film was nominated for 7 academy awards. The Caine Mutiny, deservedly, has great credentials. Enjoy this fine film!