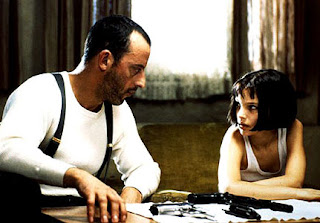 This is a most unique film. It has elements that I found captivating and others that made me quite uncomfortable. But, overall, Leon-The Professional is well worth a look.

In 1994 French director Luc Besson had a break in his schedule. He was about to start 'The Fifth Element' starring Bruce Willis. However, Willis was delayed working on his current project. Besson did not want to lose the crew and decided to make a feature film about a character from an earlier work. This film focuses upon the Jean Reno character from Besson's 'La Femme Nikita'. In 'Nikita' Reno stars as Victor the Cleaner, a professional hit man. Here he becomes Leon-The Professional.

Leon is a slow individual who has come to America and become a professional thug. He has become a master at his craft by refusing to become involved with anyone or anything. Natalie Portman, in her debut, portrays Mathilda. Mathilda is 12 and lives in the apartment next door. Her father is involved in transporting drugs and her entire family is killed when her father tries to steal some drugs. Leon saves Mathilda and she vows revenge. Gary Oldman, at his creepiest best, plays Stansfield. He is the head of the drug gang. Mathilda convinces Leon to teach her to be a "cleaner" so that she can avenge her father and brother's deaths. He reluctantly agrees and they develop a camaraderie. I will leave the story of their success or failure for you to view unspoiled. 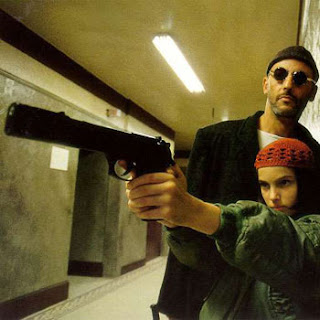 Reno, Portman and Oldman are all fantastic. Director Besson, who also wrote the script, gets great work from all three. Oldman's ability to petrify and disturb the viewer is put to full value. He is over-the-top and under-control at the same time. But the bond between Reno and Portman makes the film, somehow, touching. Leon comes to realize that his life has been entirely empty while Mathilda needs his guidance and protection. They become important to one and another. That special relationship propels Leon-The Professional from typical action/assassin flick into something much more. However, that relationship is also a little creepy. There is an underlying tone of sexuality. Remember, Mathilda is 12. In France that may be standard, but in the US it is uncomfortable. I found myself squirming, just a little, at a few moments of their interaction. As did American audiences. The film was edited, to remove much of this content, for American release. Pick-up either the international version or US version depending upon your preference.

But Besson has made one of his best films. He may be better known for 'The Fifth Element' and 'The Transporter', but this film and 'Le Dernier Combat' represent his finest achievements. For a film about drug deals gone bad, professional hitmen and the murder of a young girl's family, Leon-The Professional is somehow warm and sweet. I hope you enjoy.

Filmed in 1994, directed and written by Luc Besson, starring Jean Reno, Natalie Portman, Gary Oldman and Danny Aiello. For more info on 'Le Dernier Combat' you can read my earlier article here.
Posted by CinemaSteve at 8:24 AM