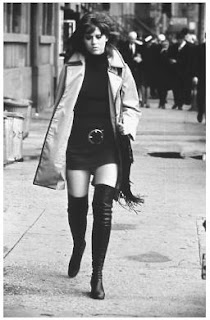 Many critics and viewers have said this film should be called 'Bree' and not Klute. Since the Jane Fonda character Bree Daniels is the focal point of the story. But it is the actions of detective Klute, played by Donald Sutherland, that force the story to move forward. His persistent inquisitions make Bree discover so much about herself and how we find out who is the killer.

It is true that this film hinges upon the performance of Jane Fonda. She wins her first of two Best Actress Oscars for her amazing work in this movie. As I said in my tweet (@movieguysteve), it is amazing how she was willing to be so unglamorous. Bree Daniels is a manipulative call girl. But Fonda's portrayal shows her to be an insecure woman who is attempting to live her life to the best of her abilities. She wants more, like most of us, but her frailties and faults get in the way, again just like most of us. You should watch this film just for her acting. During the denouement the camera focuses upon her face as she listens to a tape of the murder of her friend. You can feel the growing fear and disgust that Fonda expresses with just slight movements of her facial features. She is fantastic. I sometimes forget what a fabulous career she has had. I have written earlier pieces about 'They Shoot Horses, Don't They?' and 'Barefoot in the Park'. Jane Fonda can act!

The other performers in Klute are also terrific. Donald Sutherland, in the role of the lead detective, shows little emotion. Just a drive to find the facts and solve the case. Roy Scheider is so sleazy as Bree's agent(pimp) that I squirm, just a little, while he is on screen. 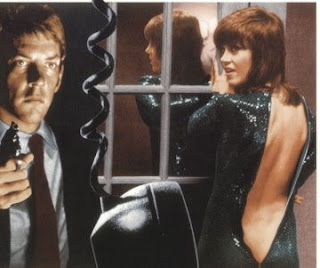 The script, written by Andy and David Lewis, is straightforward. A man goes missing and his wife wants him found. The police, after finding a note to a prostitute in his desk, assume that he has run away. His employer and wife hire Klute to go to New York and locate the man and the truth. There he finds that the prostitute (Bree) has been receiving obscene phone calls and feels that she is being watched. Is this the man that Klute is looking for? His efforts lead to the discovery of multiple murders and endangers Bree's life. Private Detective Klute pushes against all those involved in an effort to solve these crimes.

Klute is an excellent piece of film making. Director Alan J. Pakula moves the film along. I do find it interesting, however, that for a film about the multiple murder of prostitutes that there is very little violence or sex. That makes this film very different from most. Many writers and/or directors would have chosen to play up the sex and violence. Not Pakula. He keeps the film intelligent and stays away from gratuitous nudity or violence.

One note: In her autobiography, Fonda says that she spent time on the streets with prostitutes before filming Klute. After this experience she felt that she was not attractive enough and that she should be replaced by Faye Dunaway. I am very glad that the producers convinced her to continue on. This film is much better for her performance.
Posted by CinemaSteve at 12:12 PM