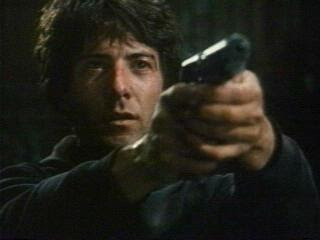 Taut thriller that combines the everyman on the run storyline with excellent performances. Dustin Hoffman plays a graduate student living in New York City. He believes that his brother, portrayed by Roy Scheider, is an international businessman. Of course it wouldn't be much of a film if that was true. Instead Scheider is a spy working for "the division". When his brother is killed Hoffman pursues those responsible. Leading the bad guys is Laurence Olivier. Olivier plays an aging Nazi that is collecting the diamonds he stole from Jews during World War Two.

The fabulous thing about Marathon Man is the chemistry of the cast. Hoffman and Scheider "feel" like brothers who have a history. Marthe Keller, a Swiss actress known best in Europe, plays the love interest to Hoffman. Their relationship grows in an authentic way. William Devane is Scheider's boss/co-spy. Devane has made some terrific films and is spot-on here. But the film's central story line revolves around Hoffman and Olivier. In the later part of his career Olivier gave up the over-acting and became a complete performer (my earlier blog 'A Little Romance'). He plays the cool and calm Nazi to perfection. You distrust and dislike him from the moment he appears. He and Hoffman make a terrific protagonist/antagonist couple. I find myself rooting for Hoffman just to see Olivier lose. Great job! Olivier was nominated for the Best Supporting Actor Oscar for this film. 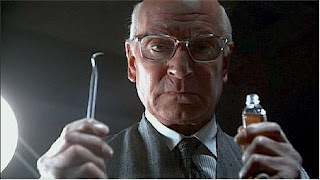 This movie is also a great collection of talent. Besides the outstanding cast, it was written by William Goldman. He adapted the screenplay from his best-selling book. The film builds and has a deliberate pace in the beginning. But the tension, and my interest, grow as the story continues. Goldman has written many great scripts including 'Princess Bride', 'All the President's Men', 'The Hot Rock' and, one of my favorite movies, 'Butch Cassidy & The Sundance Kid'. He has a deft touch with language that I so appreciate. Marathon Man was directed by John Schlesinger. He won an Oscar for 'Midnight Cowboy'. He deserves kudos for allowing the script and actors to carry the film. There is only a small amount of special effects. The violence is limited, but is very terrifying. For anyone who has seen it, the sound of Olivier's drill can not be forgotten. It still brings a chill to me.

A terrific cast, intelligent script and crisp directing combine to make a thoroughly enjoyable film. It is a top-notch thriller.

Notes: The torture scene in Marathon Man was shortened after many members of the preview audiences became ill. Also, the line "Is it safe?" is listed at number 70 on AFI's list of great movie quotes. 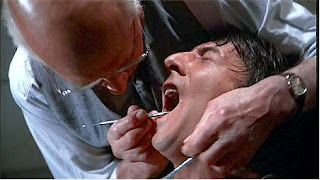 Posted by CinemaSteve at 7:10 PM