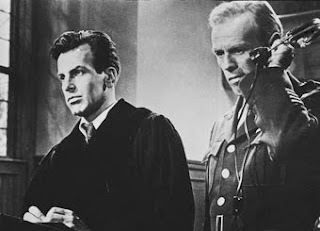 "We did not know. No one knew about the terrible things going on at the camps."

"Besides. What could we have done? Who are we to have made a difference?"

I have a dear friend who was born and raised in Germany, post-WW II. He tells me that no matter with whom he spoke he could not get anyone to talk of the happenings during the War. The only thing he could extract from the adults who lived through the war was that they had no idea. No idea of the atrocities. No idea of the horrors. No idea at all. That very concept plays at the heart of this riveting film. What could the people living in Germany under the NAZIs do? What responsibility did they have? Was it possible for no one to know? 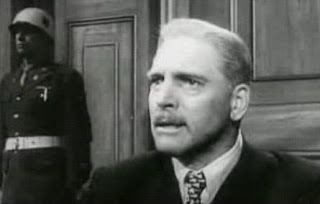 In Judgement at Nuremberg the question is raised about the judges themselves. The film tells the story of the trial of 4 prominent judges of the Third Reich. The allies are trying them for war crimes after World War Two. Spencer Tracy portrays the judge, from America, who is in charge of the proceedings. Burt Lancaster plays the most famous of the German judges on trial. Richard Widmark does terrific work as the prosecuting attorney, but Maximilian Schell, among all the wonderful actors, almost steals the film. He won an Academy Award for his fantastic work in Judgement at Nuremberg. Although his character is appalled at the horrors of the NAZIs, he puts his total effort into defending the German judges. His passion comes through vividly.

Also nominated for acting Oscars were Spencer Tracy, Montgomery Clift and Judy Garland. This was Garland's first movie in over 7 years. Screenwriter Abby Mann, who worked primarily in television through-out his career, also won an Oscar. Even though the movie is almost 3 hours, the tension from the script and acting keeps my attention. Director Stanley Kramer also deserves recognition for putting all that talent, and all those egos, to excellent use.

This is one of the great courtroom dramas. With deep moral and philosophical questions, great acting, writing and directing and drama for the entire film, Judgement at Nuremberg is a terrific film. 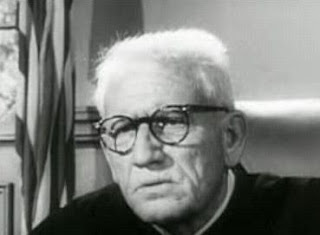 Filmed in 1961, directed by Stanley Kramer, written by Abby Mann, starring Spencer Tracy, Burt Lancaster, Richard Widmark, Maximilian Schell, Marlene Dietrich, Montgomery Clift, Judy Garland and, in an early in his career appearance, William Shatner. Judgement at Nuremberg was nominated for 11 Academy Awards, but lost out for most of them to 1961's monster hit 'West Side Story'. If you are interested in more information of the history of the Nuremberg trials, I suggest you get Leon Goldensohn's fascinating book 'The Nuremberg Interviews'.
Posted by CinemaSteve at 5:00 AM