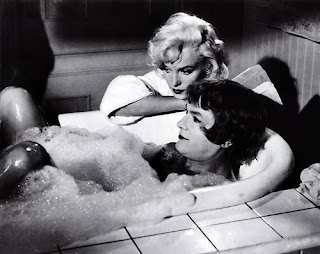 Voted the "funniest American movie" by the AFI on its "100 Years...100 Laughs". Tony Curtis and Jack Lemmon play two 30's era musicians that accidentally witness a gangland slaying. They go "on the lam" and pose as members of an all-girl band. Since they are both very much not girls this requires a great deal of make-up, voice changing and wardrobe enhancements. Marilyn Monroe shows off her comic talents, and her great bod, as Sugar Kane, the band's singer.

Actor Joe E. Brown does a terrific job as an international playboy who develops quite the attraction to the very confused Jack Lemmon (in his female persona). Tony Curtis becomes enamored with Ms. Monroe, but, of course, can not tell her his true gender because of the mobsters on their tail. Madcap and zany fun is had by all!

Writer/Director Billy Wilder has done many of my favorite films. Most of them are dramas, but he shows off his true comedic talents with Some Like it Hot. The script is outlandish, the actors over-the-top and the pace frenetic. Most enjoyable! This won an academy award for the costumes. Putting Curtis and Lemmon in drag was no small feat. Both were attractive leading men used to getting the ladies, not being one. But I, audiences and the AFI loved the transformation. And this movie.

Posted by CinemaSteve at 4:35 PM