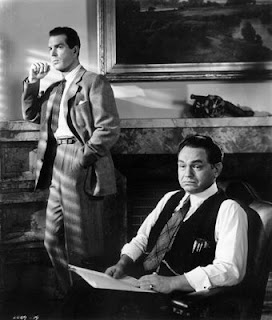 Every short list of great American cinema includes this film. Far and away, Double Indemnity is the best and purest example of "film noir". To me, the heart of "noir" is that an evil temptress must seduce a pure and good person over to the dark side. In this case Barbara Stanwyck provides the temptation and Fred MacMurray is the one being corrupted. Edward G. Robinson plays the third vital role:the moral authority that must pursue and capture the evildoers. All three are perfect in their roles. Stanwyck convinces MacMurray to move from good to evil and Robinson works to bring them to justice.

Film noir is a cinema movement that experienced its heyday in the 1940s. As the world battled evil and tyranny in World War Two so does the movies. After the war ends, the movies continue to provide the classic evil corrupting good story line, but instead of nations the focus is upon individuals. An important aspect in this movement is the woman being of questionable morals and virtue. So much of Hollywood was hindered by the Production Code. This code greatly inhibited Tinseltown's ability to show women in this light. Film noir allowed for women to be sexual, tempting and criminal. All things that were greatly discouraged by the code.

Double Indemnity was directed and co-written by the great Billy Wilder. He, along with Raymond Chandler, turn James Cain's novel into a film filled with biting dialogue. The script is what makes a simple crime movie into the embodiment of an entire cinematic movement. Billy Wilder is one of the great directors and his work here is perfect. Lighting, camera movement, dialogue, acting and staging all combine to create an American masterpiece. 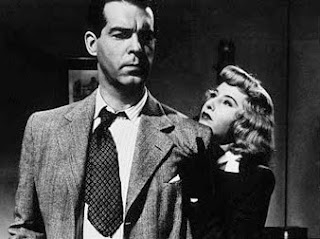 Stanwyck plays a woman who wants her husband dead to collect the insurance money. MacMurray portrays the hapless insurance salesman seduced into helping her collect on the "double indemnity" clause in the policy. This clause means that Stanwyck collects double if her husband dies in an accident. Robinson is MacMurray's co-worker who is the insurance company's specialist in finding fraud. The trio are perfectly cast in their roles. Each provides a wonderful platform for the different elements of the story to evolve.

This is one of my personal favorites. It is crisp, entertaining and intelligent. I hope you enjoy it as much as I.