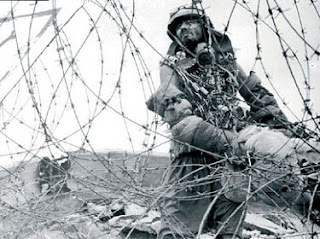 This is one of the more original films I have ever seen. And since I have seen almost 6,000 movies that covers a lot of ground. Directed by a fledgling Luc Besson, best known for 'The Fifth Element', Le Dernier Combat is almost without dialogue. I can remember less than 100 words spoken for the entire film. Since this film is French it makes the issue of sub-titles vs. dubbing a moot point. However, without dialogue does not mean without story or action. This film is visionary and unique.

Le Dernier Combat tells the story of 'The Man', played by Pierre Jolivet, in his search. What is he searching for and what will he do when he finds it? We don't know. (None of the characters in the film have names. I guess without dialogue how can we learn their name?) Jolivet, who co-wrote the script with Besson, is riveting as 'The Man'. The film is set in an Earth that has been almost destroyed. While we are not exactly sure by what we do know that everything is in ruins. This creates some very interesting visual opportunities for writer/director Besson. The skyscrapers covered in sand and the fish that rain from the sky are just two examples from a film that helped build Besson's reputation for visual mastery. Along the way The Man meets others attempting to survive the destruction. Jean Reno, one of the world's finest actors, is fabulous as 'The Brute'. And veteran actor Fritz Wepper portrays 'The Captain'. But it is Jolivet, who co-wrote the script with Besson, who captures and keeps our attention. 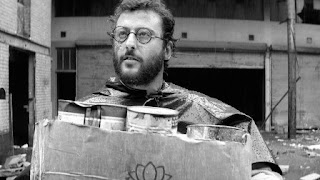 How Jolivet faces the new world and all its difficulties is the plot of Le Dernier Combat. It seems that everyone on Earth is out to destroy everyone else still alive. But how 'The Man' attempts to recover his humanity is what makes this movie worth watching. There is nothing but the will to survive. Can 'The Man' stop fighting long enough to regain the person he was? Can anyone, in the face of apparently insurmountable odds, retain their humanity? Or are we all just animals, ruled by base emotions and instincts, that pretend something more?

This film is visually intriguing and filled with emotion and drama. The cinematography alone makes it worth seeing. The acting and directing have turned Le Dernier Combat into a bit of a cult classic. The only criticism I can find is that Besson borrowed some of the feel and image of 'Mad Max'. While I believe that this is accurate that does not make Le Dernier Combat unoriginal. It is anything but.

Filmed in 1983, directed by Luc Besson, written by Besson and Pierre Jolivet, starring Pierre Jolivet, Jean Reno, Fritz Wepper and Jean Bouise. The soundtrack was written by Eric Serra. He has become Besson's favorite composer and has worked on many movies. 'Goldeneye', 'Nikita' and 'Subway', in addition to this film, are just a few examples.