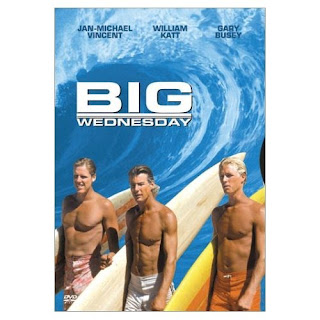 This film is a cult classic. Like all cult films you either "get it", and therefore love it, or you don't. In the case of Big Wednesday I get it. This is director John Milius's homage to the zen of surfing and the beach lifestyle. He grew up on the beach and in the water. It shows. He understands the 'us vs. them' mentality of surfers and the mystical experience of sitting on your board. If you love surfing or the beach the scenery in this movie will make it worth while. If you think that spending 3 hours sitting on a surfboard, just waiting for the perfect wave, is a waste of time then you should skip this movie.

This film starts in the early 60's and covers more than a decade. Jan Michael-Vincent, William Katt and Gary Busey star as 3 close friends who spend their days surfing. They are as close as any friends can be. They watch out for each other, spot surf for each other and provide support, comfort and solace as only great friends can. The film covers more than a decade of their lives as they move in and out of the surf. Eventually all 3 must face the fact that they can't stay surfers and must grow up. As the character 'Bear' (Sam Melville) says "nobody surfs forever". We share their love for the ocean and observe the guys as they move from the beach to adulthood.

Milius actually made 5 half-movies and combined them. There is a fantastic surf move, a poignant coming of age story, a very weak high school farce film, a funny draft-dodging sequence and a decent buddy flick all combined in Big Wednesday. The surf sequences are worth the price of admission. Gloriously filmed by surf auteur Greg MacGillivray, the scenes in and around the surf are spectacular. It truly helps that all 3 stars could surf. You could see it was them, and not some ridiculous double, on the boards. Also, look for surfing great Gerry Lopez. He shreads. The rest of the movie is hit or miss. Outside of the water the film covers social issues facing America during this time period. Vietnam, race riots, the draft and a changing society are all featured. Some are handled much better than others.

But above all this is a surf movie. If you love the surf you will love Big Wednesday.

Posted by CinemaSteve at 3:14 PM