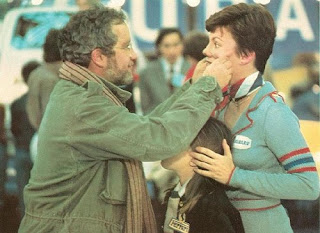 Marsha Mason has been dumped by yet another man. She and her daughter are left on their own in a tight, two-bedroom New York apartment. Unbeknown to her, her ex has sublet the apartment to someone else. She becomes quite surprised, and panicked, when the new renter attempts to remove them from their home. Richard Dreyfuss, in his academy award-winning role, portrays that new renter. The film follows the story of the struggling actor, Dreyfuss, and the back in the business dancer, Mason, as they attempt to rebuild their lives and careers while sharing this apartment.

This is one of the great romantic comedies. Unlike most of the genre, these characters are real and substantial. Neil Simon writes dialogue of which most other playwrights can only dream. Quick one-liners are intermixed with well-developed people and stories. As I watch The Goodbye Girl I find myself beginning to side with either Paula (Mason) or Elliott (Dreyfuss). But soon I will be working my way to the other side. And back again. Quinn Cummings plays the 10 year old daughter Lucy. It is nice to see a child that doesn't scream at her parents and steal a car. She is just a kid in a difficult situation.

Director Herbert Ross allows the script to tell the story. Done with a minimal amount of editing, no special effects and few sets. Just good acting and great writing. The scene in which Elliott (Dreyfuss) performs a flaming, gay version of Richard III is worth the price of admission on its own.

We, and Hollywood, need more movies like The Goodbye Girl. This movie is warm, tender and quite funny. Terrific.

One side note. 1977 was quite a year for Richard Dreyfuss. Not only did he win the Best Actor Oscar for The Goodbye Girl, he had a bigger box office hit with 'Close Encounters of the Third Kind'.

Posted by CinemaSteve at 8:30 AM