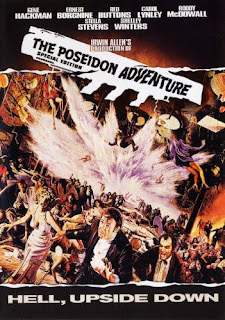 Here it is. New Year's Eve, 2009. I am getting ready for the big celebration. No, not the clock striking midnight. My big celebration is watching the greatest New Year's Eve movie ever. The big moment in The Poseidon Adventure occurs just as the crew and passengers are celebrating the arrival of the new year. The S.S. Poseidon is overturned by a giant rogue wave just after the stroke of midnight. Not only does it become a new year, but it becomes a new, upside-down world for the people on board. Rev. Scott, played by Gene Hackman, must lead the band of lonely survivors from the ballroom to the engine room in the hopes of escaping this disaster. Ernest Borgnine, Red Buttons, Roddy McDowall, Stella Stevens and Shelley Winters are among the group that attempts to "go up to the bottom" in an effort to escape. Winters received an academy award nomination for her work as the overweight, former swimming champ that saves the day. Who, if any of them, will survive? 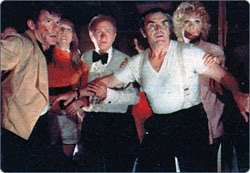 This is the crowning achievement of the 1970's disaster movie movement. Irwin Allen, the king of disaster movies, produced and partially directed this film. Around my house it is called "cheesetastic!". The script and characters are exactly what you would expect. But once the ship overturns and the adventure begins I find myself rooted to the seat awaiting the next pitfall. The effects hold up quite well in our present world of cgi (computer generated images). Everything in The Poseidon Adventure is done with real people. The scene of the man falling through the glass ceiling is still a classic.

If you saw the film in a theater, especially back in 1972 when it was released, you may remember the entire audience leaning in their seats when the ship overturns. You know, of course, that leaning won't have any effect upon the movie, but your body just leans anyway. It is that kind of shared experience, which only movies provide, that is missing from sitting at home watching a DVD. 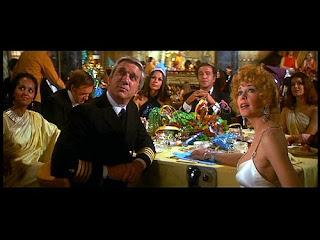 Does anyone remember the sequel 'Beyond the Poseidon Adventure'? Michael Caine and Sally Field? No. I didn't think so.