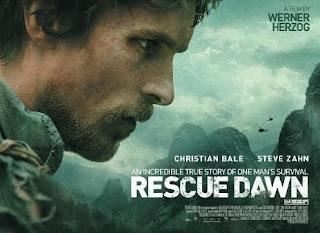 Intense! This film follows the story of Vietnam War prisoner Dieter Dengler. He is a German-born, U.S. pilot that is shot down during his first mission in Vietnam. He was actually flying over Laos when he crashed in 1965. Rescue Dawn tells of his capture, imprisonment and escape from the Viet Cong. He was one of the few Americans to escape from the Viet Cong and his ordeal is both amazing and petrifying. I found the story, and the film, to be compelling.

Christian Bale plays Dengler. He does an excellent job portraying the anguish and desperation that plagues POWs. Dengler refuses to succumb to the depression that many prisoners feel, but instead focuses upon escape. Steve Zahn and Jeremy Davies play fellow American prisoners in the remote jungle camp where Dengler is finally placed. All 3 actors do a very credible job with difficult roles. Because they are constantly being watched, the characters have to show little emotion. Bale, Zahn and Davies communicate all the difficulties of their imprisonment, starvation and torture without overacting. They even appear to have lost a lot of weight in an effort to add to realism.

Rescue Dawn was directed and scripted by Werner Herzog. Earlier Herzog had done a short film about Dengler. He decided this story deserved the full treatment. He does a fantastic job conveying the intensity and desperation without becoming morose or maudlin. Everything is filmed in the jungle. The rich colors offset the dreary prison camp with powerful results. The score, which is unique, is kept to a minimum. Herzog instead allows the sounds of the camp and the jungle to aid the storytelling.

Christian Bale deserves kudos for his job. He is in every scene and does a great job. Don't shy away from Rescue Dawn because of other things he may have done. This film deserves your attention.

Posted by CinemaSteve at 3:13 PM