I love British comedies. Especially 'Monty Python'. One of the greatest gifts I ever received is the '16 ton Megaset' of DVDs which I got for my birthday. (My birthday is September 4th just in case you want to send gifts!) And of all the cast of 'Python' John Cleese is my favorite. His manic energy and always "ready-to-explode" personality are hilarious. From 'Monty Python' to 'Fawlty Towers' to 'A Fish Called Wanda' Cleese delivers laughs. Which is why I was so excited to go see Clockwise when it first arrived in Los Angeles in 1986. I never understood why it received so little attention in the U.S. It was a big hit in England, but never caught on here. It should have!

This film tells the story of one ill-fated day for a British school headmaster that is obsessed with punctuality. Headmaster Stimpson, played by Cleese, is to travel 150 miles to become the chairman of the national headmaster organization. He, and his students and family, are most proud. Of course, the journey is filled with nothing but problems. Everything that can go wrong does. Travel problems, luggage issues, a visit to a monastery and many other roadblocks stand between Headmaster Stimpson and his moment of glory. You can see the pressure building within Cleese every step of the way. His fans know that you can only hold John Cleese in for so long. How and when that massive pressure gets released is the question.

Clockwise is one of the few times that Cleese neither writes nor directs his appearance. Writer Michael Frayn does a wonderful, if at times painful, job of destroying each new chance at success for our beleaguered Headmaster. Each obstacle is small and can be overcome, but the succession of events builds throughout. Director Christopher Morahan does a terrific job at the helm. He allows Cleese to be Cleese, but insists he stay within reasonable bounds. At least most of the time. 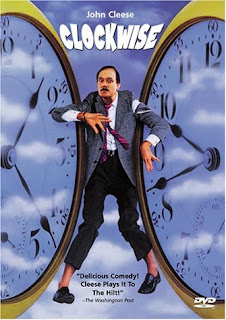 Clockwise is manic, pressure-filled laughs as only John Cleese can deliver. If you are a fan of John Cleese, this is must see. If not, you should probably avoid this movie. It might not work for you.

Trivia Note: The school in this film is named Thomas Thompion. He was a pioneer of clock and watchmaking in the 17th Century. Quite fitting for a movie about being on time.