The Paths of Glory

Happy New Year to everyone! This film, and others like it, are why I started this blog. The movie is great and I hope you enjoy it and 2010! 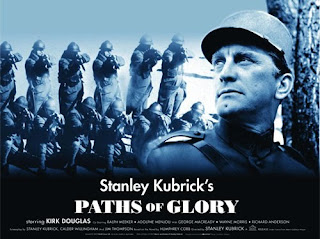 I consider this to be the best film that remains unseen by many. Voted to almost every "greatest" movies poll it is must viewing for anyone who enjoys movies! This film is about World War I, but Paths of Glory is the most anti-war movie ever released. Leonard Maltin says "shattering story of the insanity of war" and "stunningly acted and directed". The New York Times says "its message growing only more pertinent and potent with each passing year". I say it is one of the most powerful films that I have ever seen. Just writing this blog refreshes the emotions I experienced viewing Paths of Glory. Anger, frustration, disgust, I want to yell at the participants about their actions. Any film that can do that should be seen by all.

Director Stanley Kubrick's best work. I love Dr. Strangelove. I have seen Spartacus about a dozen times. A Clockwork Orange still intrigues me. But Paths of Glory is his crowning glory. This film is superbly acted, written and directed. Kirk Douglas is powerful. Adolphe Menjou and George Macready are terrific as Douglas's commanding officers. The script, written by Kubrick, Calder Willingham and Jim Thompson is top-notch. Based on the novel by Humphrey Cobb which is based on the actual trial during World War I.

One important fact. The film is about French officers and soldiers during World War I. After this film was released it was banned in France!

Paths of Glory tells the tale of an ill-advised, almost suicidal, French attack upon a German position. Douglas, portraying the field commander, does not want to proceed. He is pressured into making the attack with disastrous results. 3 of his men are chosen to be tried for cowardice after the failed action. Douglas defends these men at their trial. I find that I run out of adjectives as I write this entry. Stunning, superb, powerful, emotional and must-see are just a few.