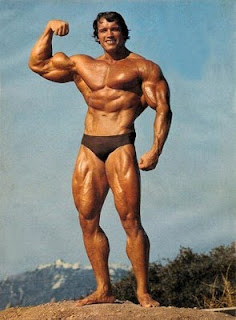 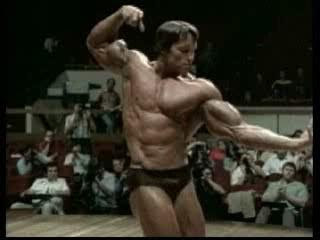 This documentary covers the epic battle between Arnold Schwarzenegger and Lou Ferrigno for the 1975 Mr. Olympia title. Pumping Iron covers a 4 month buildup as bodybuilders throughout the world prepared for the finals in Pretoria, South Africa. While everyone in the movie is built, somehow Arnold appears bigger and better than everyone else.

It is fascinating to see these two future stars in their "natural" environment. Arnold is a five-time defending champion who, at age 28, is tops of the bodybuilding world. Schwarzenegger is about to shift from competitive bodybuilding to starring in movies. The "Terminator" to be exudes charm and personality throughout his workouts and public appearances. He excites the crowd and gathers the fans no matter where he is. Ferrigno is the up-and-coming challenger. Ferrigno is 24 and about to burst upon the bodybuilding world and, in a few years, would be forever known for his role on 'The Incredible Hulk' television show.

Filmmakers George Butler and Robert Fiore captured over 100 hours of workouts, appearances and interviews in the months before the final. They do an excellent job of presenting what could otherwise be very boring material (guys lifting weights). The attention to personality and detail make this an informative and intriguing documentary.

As I watched this movie, while eating some Mac and Cheese, I felt like getting back in the gym and pumping iron again. To me, that is the sign of an excellent film!