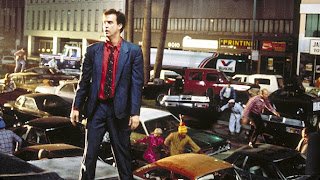 It's the middle of the night. You are at a L.A. coffee shop, late for a date. The phone rings and you decide, since it's ringing, to answer the phone. The panicked voice on the line mistakenly thinks he is talking to his dad. The voice informs you that "the button has been pushed" and that in 70 minutes "they will hit us back". You then hear gunfire and a different voice tells you to "forget everything that you heard". Was the call a prank? Is nuclear war about to start and is the end of the world about 70 minutes away? Do you run? Who do you tell?

That is the premise for Miracle Mile. Writer/Director Steve De Jarnatt created a situation that everyone on Earth faces, in one way or another. We all have the sceptre of nuclear annihilation hanging over our heads. This film stars Anthony Edwards (of ER) as Harry Washello. Harry is the unlucky (or is it lucky?) one who answers the call. He was at the diner to meet his new love Julie (played by Mare Winningham). He missed their date and she is not there. The phone rings and the entire world is changed. Or is it? The call could be a prank. He tells the few other patrons in the diner of the call. Some think he is drunk, others think he is nuts, and a few think the call is accurate and make plans to get out of LA pronto. 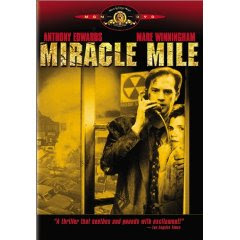 The film follows the choices and chaos that ensue as the word of the possible attack upon LA spreads. Harry refuses to leave without Julie. His determination not the leave her behind becomes the focal point of the film. With the clock ticking can he find her and get her out of town?

The script, wardrobe and acting all leave something to be desired. De Jarnatt has not directed a major film since Miracle Mile. But there is something in the quirky love story and the race against time that attracts me. I find myself rooting for Harry and Julie, even through some of the ridiculously stupid decisions they make. And who knows, under that kind of pressure, perhaps anyone would make stupid choices as well. De Jarnatt's script also shows the quickest move from quiet to chaos ever filmed. His personal belief in humanity appears to be very thin indeed.

Miracle Mile is not a great film. This movie is more "less than famous" than "classic". But I did enjoy it. Perhaps you will as well.

Note: Look for some actors who are unknown at the time. 'Forrest Gump' pal Bubba (Mykelti Williamson) has a small part. He plays the carjacking victim Wilson. Also Denise Crosby, from 'Star Trek:The Next Generation' is Landa in the diner.