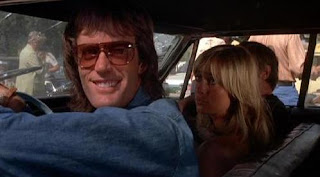 If you have seen this film, you may be wondering why it is included in a blog "dedicated to great movies". The dialogue is horrible, the acting is way over-the-top and the plot is simplistic. But there are two major reasons to enjoy Dirty Mary, Crazy Larry.

1. Outrageous car chase. The car chase became a focal point for film in the Sixties. Films like 'The French Connection' and 'Bullitt' (see my earlier blog) used car chases as dramatic moments of action. Many viewers, after seeing these films, talked about Bullitt's chase through the streets of San Francisco or Popeye Doyle's chase of the train as being the best part of the film. In the Seventies film producers and directors took the car chase to the next level. Movies like 'Gone in 60 Seconds' and Ron Howard's directorial debut 'Eat My Dust' were car chase films as a genre. The rest of these films served as secondary moments. The car chase is the movie. So too with Dirty Mary, Crazy Larry. I believe it is no coincidence that this time period coincides with the great American muscle cars. We were building bigger engines and faster cars for consumers. That too is reflected in this car chase film movement.

2. The ending. This film has one of the greatest endings ever. No spoilers here. Just watch the movie. Grimace upon some of the dialogue and acting. Enjoy the car chase. Experience the ending and drop me a line. What did you think? 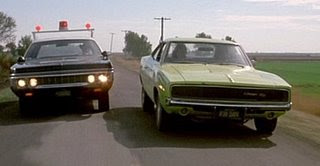 This film tells the story of Crazy Larry, played by Peter Fonda, and his mechanic Deke, portrayed by Adam Roarke. They dream of making it big in NASCAR. But they lack the funds necessary to build the race car of their dreams. So they decide to steal the cash. Dirty Mary, actress Susan George, is a young woman who decides to go along for the ride. Larry and Deke have planned every aspect of the robbery and getaway and are sure of their success. Of course, things don't go as planned. Soon sheriff Everett Franklin (Vic Morrow) is on their trail.

The plot is just a vehicle (no pun intended) to get to the car chase. Filmed throughout the agricultural districts of central California, Dirty Mary, Crazy Larry is all about the car and the chase. Muscle cars abound. One detail that I appreciate is that after crashing the beautiful 1969 Dodge Charger R/T mechanic Deke must perform some repairs. This added touch of realism is refreshing. Most car chases have the vehicles careening around without fail until the final crash. It is nice to see that, at least sometimes, when you crash a car at 100 miles an hour it just might get damaged. 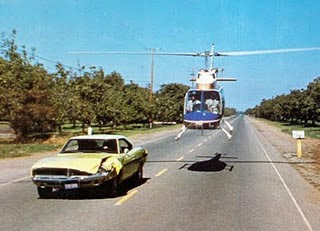 Posted by CinemaSteve at 8:47 AM