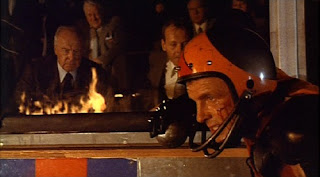 This film is often cast aside. Called "simple science fiction", "violent" or a "sports movie". While all of these things are true, the message that I get from director Norman Jewison is one of personal rebellion and individual freedom. The main character, Jonathan E., is the biggest star player in the future sport of Rollerball. Set in 2018 (which is 43 years in the future from its release) corporations rule the world. There are no nations, no wars, no poverty and no individuals. All, except the few ruling "executives", do what they are told in exchange for having their basic needs met by the corporations.

To distract people from their lack of opportunity or creativity the corporations invent a new sport. Much like the Romans before them, humanity's new rulers use violence to divert the populace. The game is designed to show that the individual has no chance in society. Only through collective efforts can one survive. Until James Caan. He plays Jonathan E. the star of the game. He has played longer and better than anyone before him and is becoming an individual superstar. The corporations must show everyone that the individual can not succeed. Jonathan E. decides that his desire for freedom and choice are worth fighting for! 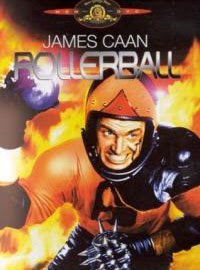 Towards the end of the movie, Caan discusses how the powerful provide basic needs to people in order to take their freedom. His ex-wife states that having your needs met is freedom. But Caan refuses to buy into this line of thought. I celebrate this message of Rollerball. Whether it is by corporations or government too often individual people in our society are pressured to surrender their freedom in exchange for some need being met.

James Caan, as star Jonathan E., and John Houseman, as the head of the corporation trying to dethrone him, put in solid performances. Houseman was coming off his Academy Award for 'The Paper Chase' and Caan was huge from 'The Godfather'. Jewison puts them both to good use. They provide an excellent contrast. Houseman represents the stoic corporate world with aplomb while Caan embodies the individual. Great casting that carries the metaphor throughout their interchanges.

The action sequences in Rollerball are quite violent. This film deserves its 'R' rating. The sport scenes do remind me of the Roman gladiatorial contests. The blood lust even spills over into the crowd. But the message of the individual vs. the collective is the true point of this film.

Director Jewison chooses to use Bach's 'toccata in D minor' as the theme for this movie. In what I consider to be a bit of an homage to 'A Clockwork Orange' Jewison goes with an almost entirely classical score. The Bach music is fantastic. Strong and powerful music for a strong and powerful film. 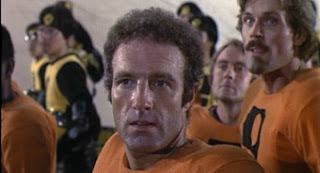 In a few weeks, on Jan. 30, 2010, director of Rollerball Norman Jewison will receive the Lifetime Achievement Award from the Director's Guild. It is well-deserved! Along with this intriguing film he directed 'In The Heat of the Night', 'Fiddler on the Roof', 'Moonstruck', 'The Hurricane', 'The Thomas Crown Affair' and many others.